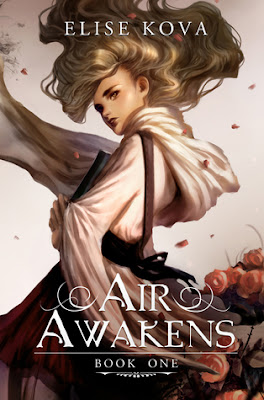 The Solaris Empire is one conquest away from uniting the continent, and the rare elemental magic sleeping in seventeen-year-old library apprentice Vhalla Yarl could shift the tides of war.

Vhalla has always been taught to fear the Tower of Sorcerers, a mysterious magic society, and has been happy in her quiet world of books. But after she unknowingly saves the life of one of the most powerful sorcerers of them all—the Crown Prince Aldrik—she finds herself enticed into his world. Now she must decide her future: Embrace her sorcery and leave the life she’s known, or eradicate her magic and remain as she’s always been. And with powerful forces lurking in the shadows, Vhalla’s indecision could cost her more than she ever imagined."


What's a book you're eagerly waiting for??
Posted by Sabrina at 7:11 PM
Email ThisBlogThis!Share to TwitterShare to FacebookShare to Pinterest
Labels: Waiting on Wednesday

The synopsis sounds intriguing! Thanks for sharing!
Here is My WoW

The book sounds good but the arm positioning on the cover really bothers me. Her head looks like it is facing one way and her body the other. However, it still sounds like an interesting read. Thanks for pointing it out as I have not seen it before.