The Paper God Series deserves a 10 out of 10 rating. 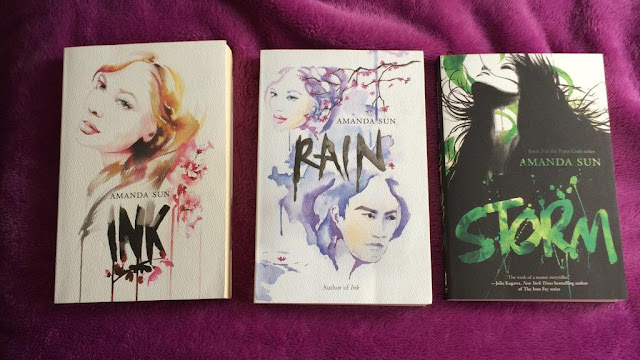 "On the heels of a family tragedy, the last thing Katie Greene wants to do is move halfway across the world. Stuck with her aunt in Shizuoka, Japan, Katie feels lost. Alone. She doesn’t know the language, she can barely hold a pair of chopsticks, and she can’t seem to get the hang of taking her shoes off whenever she enters a building. Then there’s gorgeous but aloof Tomohir ...more"

"American Katie Green has decided to stay in Japan. She's started to build a life in the city of Shizuoka, and she can't imagine leaving behind her friends, her aunt and especially Tomohiro, the guy she's fallen in love with. But her return is not as simple as she thought. She's flunking out of Japanese school and committing cultural faux pas wherever she goes. Tomohiro is ...more"

"After almost a year in Japan, Katie Greene has finally unearthed the terrible secret behind her boyfriend Tomohiro's deadly ability to bring drawings to life—not only is he descended from Kami, the ancient Japanese gods, but he is the heir to a tragedy that occurred long ago, a tragedy that is about to repeat. Even as the blood of a vengeful god rages inside Tomo, Katie is ...more"

This series intrigued me at first because it took place in Japan and I have always been super fascinated with that culture.  I haven't found much novels that actually took place in Japan (That I have seen, but I could be totally wrong and there actually could be lots aha) so I was already super pumped to read this series for that reason. Another thing I found totally unique to this series was that it involved drawings and ink. Also, besides for the fact that the outside of the books look totally ravishing, the inside of the book was equally just as good. The inside had drawings, along with drawn animations along the side of the pages. It was brilliantly designed.

After reading the whole series, this was definitely a series I will miss, and it was hard to say goodbye too.  I had grown really fond of the characters and their persona's. The story itself also developed quite nicely. I do have to clap to Amanda Sun who ended this series off brilliantly. It was quite an emotionally roller coaster and at times I was extremely terrified for what direction this book could've headed for, however it succeed to amaze me.

In Conclusion, this series left me feeling quite happy and content. I do highly recommend this series to fantasy lovers, but honestly  really to anyone who enjoys a great read.

Posted by Sabrina at 12:53 PM
Email ThisBlogThis!Share to TwitterShare to FacebookShare to Pinterest
Labels: Reviews