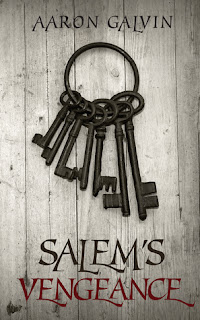 Title: Salem's Vengeance
Author: Aaron Galvin
Published: July 25th 2014 by Aames & Abernathy
Length: 252 pages paperback
Genre: Teens & YA, Mystery &Thriller
Synopsis: "Sixteen-year-old Sarah Kelly never expected to meet the Devil’s daughter. She only sought innocent dancing in the moonlight, not a coven entranced by their dark priestess. When her friends partake of a powder meant to conjure spirits - and the results go horribly awry - Sarah is forced to make a choice. To keep their secret risks her own damnation, but to condemn them may ...more"

Salem's Vengeance Deserves 8.9 out of 10 rating

This book was absolutely amazing. The Salem Witch trials has always fascinated me and was an intriguing thing to read about. I hadn't really found a retelling or a novel that had the premise of the witch trials that I really loved until I read this book.

I believe a thing to note about this book would be the characters. Each had brought a different yet great aspect to the book in every way. There were the obvious antagonists, and then there were also surprises among the protagonists too. I found the main character, Sarah Kelly to have all the right traits a female heroine needs for a story to be complete.  She also made such strong and brave sacrifices for a girl her age. Then there was Bishop, he seemed to say the funniest things, even in the times that there shouldn't have been laughing involved. I believe he added a little extra to the story. Then there was Priest, I can truly say that I have found yet another character to add to my favorites list. He was the only character that had me in a crying fit... twice. He barely spoke, however when he did, it was deep and full of emotion and I just wanted to keep reading. Well done to Aaron Galvin for writing such brilliant characters.

The story itself was also very well written. The only thing I found wrong with it was the slow start. I actually had some troubles to really get into the novel. I started getting more intrigued after I was already 35-40% done the book. That was unfortunate, however the rest of the 60% of the novel impressed me. The ending was also very nice. I know that this is a trilogy so I was worried that the author would end it on a cliff hanger, however that wasn't the case. The book ended nicely, I mean things that had happened before the ending were quite tragic, but the ending was nice.

In Conclusion this book was very well written, and I believe the reading audience can be for anyone really. It had mystery, along with some romance. It also included humor. I do highly recommend this book, especially though for those who are looking for a good book the pertains around the Salem Witch Trials.
Posted by Sabrina at 10:57 PM
Email ThisBlogThis!Share to TwitterShare to FacebookShare to Pinterest
Labels: Aaron Galvin, NetGallery, Reviews

I'm fascinated by the Salem Witch Trials too! I'll definitely have to give this a try when it comes out!