The Griever's Mark By Katherine Hurley 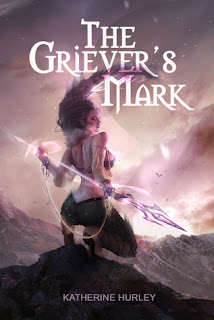 The Griever's Mark deserves 8 out of 10

"Astarti’s master controls her through a Leash, a bond of energy anchored deep within her. Despite being one of the few remaining Drifters, able to manipulate the energy world, she cannot break free. She knows her fate: she will serve until she dies, at which point her master will harvest her energy to augment his own.

Oh, yes, she’s done some bad things in her master’s name ...more"
**I received this book from the author in exchange for a honest review**
The general idea of this book was really neat. It's about Astarti, a girl who is a drifter and was raised by a cruel man by the name of Belos. Astarti happens to be leashed to Belos, basically making him her "master". She however has a mind of her own in a way, and this is helped to be proven through the Earthmaker Logan.
The book was definitely something else. I really enjoyed it and it had a lot of great aspects to it. Although there were some things about the book that I struggled with.
One of my favourite things about this book was Astarti. She is the main character in this book. I loved her because she is totally bad ass. She is the perfect girl main character because she doesn't need saving by anyone, and she can kick some butt if she wanted to. I also liked that she may have been leashed to Belos but that didn't stop her from acting on her own. I also loved the way she fell in love with Logan, slowly but surely.

I really enjoyed that magic aspect to this story. It was unique and I haven't really read a book that combined everything this book did. Its came across between an elfish, time travel (sort of) and energy twist. With that idea it just makes it generally appealing.
The only thing I didn't like about the books was Aron. Aron was the older brother of Logan. I hated how it basically took the whole book for him to trust Astarti. I also found that he was a complete know-it-all. I generally just disliked this character, but the other Bran completely made up for it.

In conclusion, this book was generally so good!! I highly recommend this book to readers of fantasy, and those who also like a little bit of romance.
Posted by Sabrina at 7:20 PM
Email ThisBlogThis!Share to TwitterShare to FacebookShare to Pinterest
Labels: Reviews