The Affiliate is on SALE!!!

I had first read and reviewed The Affiliate back in the fall { Link to my review HERE }, and what can I say besides WOW. It received a 9 out of 10 rating from me. I have been craving the sequel for ever and I just can't wait for it to come out.
The Affiliate is worth every dollar, but now since it's been reduced to under a dollar EVERYONE should go and buy! I promise that you won't regret.
~About the Book~ 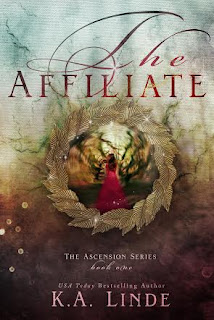 Title: The Affiliate {Ascension #1}
Author: K.A. Linde
Publication Date: September 15th, 2015
Length: 339 pages
Description: "On the day of her Presenting, in front of the entire Byern Court, seventeen-year-old Cyrene Strohm's lifelong plans come to fruition when she's chosen as an Affiliate to the Queen.

Or so she thinks. When Cyrene receives a mysterious letter and an unreadable book, she finds nothing is as it seems. Thrust into a world of dangerous political intrigue and deadly magic, Cyrene's position only grows more treacherous when she finds herself drawn to the one man she can never have...
King Edric himself.
Cyrene must decide if love is truly worth the price of freedom. Find out in this first book in USA Today bestselling author K.A. Linde’s new Ascension series."

~Now For the Exclusive view of the prologue..ENJOY~

“Let them in.” King Maltrier pulled in a shuddering breath and then coughed raggedly for a minute.
“Your Majesty, are you sure?” his longtime servant asked. He had the same relentless attitude that he always had, but he sounded more earnest than ever, as if he could will the King not to die.
“Get them, Solmis. Now.”
Solmis walked wearily across the darkened room. He heaved open the weathered door to the King’s bedchamber and spoke to the pair of guards standing watch, “Get the boys. The King wishes to speak with them.”
One guard punched his right fist to the left side of his chest in a formal Byern salute and then walked into the outer chamber. A moment later, he returned with two young boys with the same dark hair and blue-gray eyes that marked them as Dremylon heirs.
“This way, boys,” Solmis said. He was one of the few people who could get away with calling the Princes boys.
“Thank you, Solmis,” Edric, the crown prince, said with a smile and the confidence of someone who never wanted for anything.
The second son, Kael, pushed past them both, mimicking his brother’s stride. His face was set in a scowl. Some of his youthful exuberance had already drained out of him, and in its place was cynicism from losing a mother too young and from having a sick father, but mostly, it was from being second.
“Father,” he called out.
“Come here, Kael,” the King said. He patted the side of the bed. “You, too, Edric.”
Edric walked to his side and settled into a chair while Kael hoisted himself up onto the bed.
With Edric being fifteen and Kael at thirteen, both were much too young for this kind of loss.
The King had seen his youngest, Jesalyn, earlier that day. She had cried the entire time, understanding what was coming and knowing she could do nothing to stop it. In tears, she had run out of the room and straight into Consort Shamira’s arms. She had all but raised the child after his wife, Queen Adelaida’s unceremonious death.
But he couldn’t waste thoughts on that now. He was tiring with every passing moment. The boys…they had to know.
“Solmis,” the King said, regaining a shred of strength.
His servant, his old friend, left the room, giving them the privacy they needed.
“Father,” Kael repeated impatiently.
“I’m dying,” King Maltrier said.
Silence followed the declaration. Kael looked aghast. Edric tried to hide the shock of what he knew would be coming next.
“Edric will succeed me.”
“I’m too young to be king,” Edric whispered.
“Fifteen is not too young.” The King thought that was questionable, but he would not dispute it with his son. Edric had to be strong. He had to rule. “You have the Consort and my High Order to help and guide you.”
Edric swallowed and nodded. “Yes, Father.”
“Trust in yourself, and all will go as planned. I have formed an alliance with Aurum for Jesalyn to be queen and another with Tiek, who has offered you their young Princess Kaliana. Honor these matches to keep our people safe. A strong king is one with an heir.”
The King leaned over and coughed into a handkerchief for several minutes. His throat was raw, and his lungs ached. He didn’t know how much more he could take, but he had to pass on their legacy.
But could he put that burden on them?
He had to decide now.
No. He would tell only one. He would pass it on to the boy most like himself—the one who could handle the knowledge, the one destined to rule.
The King turned to one of his sons and said, “I need to speak with your brother alone for a moment.”
His eyebrows knit together as hurt and confusion clouded his features. “But, Father—”
“Go,” King Maltrier commanded.
He clenched his jaw, stood, and left without another word.
It was the last time the King would ever see his son.
The door closed roughly behind him.
King Maltrier turned to his other son. “You know the story of our ancestor Viktor Dremylon.”
He nodded, but the King continued anyway.
“Viktor struck down the evil Doma court that subjugated our people. Then he claimed the throne for himself with the sole purpose of ruling in a fair and just system.”
“Yes, Father.”
“History is told by the winners.”
“What do you mean?” He tilted his head and looked concerned.
Perhaps he thought the King had already lost his mind.
“Viktor did destroy the Doma court, and he ushered in a new era of Dremylon rule that has persisted two thousand years up until you today. But what is not in the stories is that the Doma court had ruled because they had powerful…abilities.”
His son laughed like his father was telling a fairy tale.
“Listen!” the King snapped. That sent him into another fit, and his son helped him sit up, so he could cough into his handkerchief.
When King Maltrier leaned back again, the King saw blood had coated the white silk.
“Father, you should rest.”
“I need to tell you—” He was interrupted by another cough. “—the truth. Viktor beat the Doma court and the most powerful leader they had ever known, Domina Serafina, by stealing magic—dark magic, a magic that cursed Viktor and all his ancestors. It cursed me…and you…the entire Dremylon line.”
His son remained silent and still. The King had gained his attention.
“Now, I must leave you with this, Son.” The King retrieved a heavy gold key from around his neck and placed it in his son’s hands. “A lockbox in the wall in my closet contains Viktor Dremylon’s writings. Collect it, and tell no one. You must continue our legacy. Anyone who has Doma blood and discovers their magic must be eliminated. They threaten our power, your power. They threaten the very world we live in.” 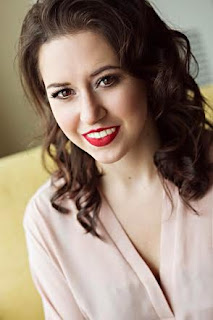 USA Today bestselling author K.A. Linde is the author of The Affiliate, the first book in the Ascension Series.  As a military brat, she traveled the world with her family, imaginary friends, and ever-increasing supply of books.  She has spent much of her life dreaming up new worlds and characters and forcing them into uncomfortable, usually life-threatening scenarios.  After graduating from the University of Georgia with a masters degree in political science, she began spending every waking hour putting those characters onto paper.
When not writing, she spends her time dancing, collecting paperbacks in the hopes of filling a Beauty and the Beast style library one day, traveling to visit her friends who live all over the country, and still reading anything she can get her hands on.  She currently resides in North Carolina with her husband and two puppies, Lucy and Riker, where she is hard at work on her next novel.

~Giveaway~
a Rafflecopter giveaway
Posted by Sabrina at 6:00 AM
Email ThisBlogThis!Share to TwitterShare to FacebookShare to Pinterest
Labels: Blog Tour