Gabriel and the Swallows by Esther Dalseno

"Gabriel and the Swallows is a masterpiece of a novel. It’s one of the most unique books I’ve ever read, and it became a favorite even before I finished reading it." ~Michelle Madow, author of the Transend Time Saga, Secret Diamond Sisters, and Elementals series. 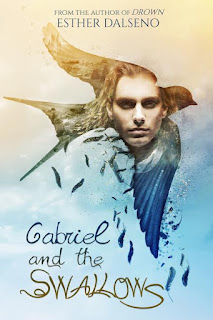 There is more to Gabriel than the life he’s ashamed of – the son of peasant winemakers, bullied relentlessly on account of his disabled mother. For Gabriel has a secret: the elaboratedream world he descends into at night – a grandiose, vivid existence – is becoming more real than his waking life.

Wrestling with manhood whilst beckoned by ancient rites and foreign lands, Gabriel is about to make a deadly decision that changes the course of life as he knows it…as long as he can decide which reality he’s in.

** Disclaimer: I received this book as an advanced readers copy before the release date so some of the events and plot could be changed in the final version, thoughts could very as well.**
I gave this book 3.8 out of 5 stars on GoodReads which translates into a rating of 7.9 out of 10 on my blog.

Esther Dalseno does it yet again, from Drown to now Gabriel and the Swallows; she knows how to take her readers hearts an affect it in all the right and wrong ways. I will admit that I did have some minor issues pertaining around the novel, but in the end I finished in a puddle of emotions and all the feels that I wouldn’t trade for anything.

For starter’s let’s just mention the minor issues I had with this novel so that my review can finish with goodness and a bang. It took me a really long time to get into a reading streak with this novel. Now I can’t entirely blame this on the novel because I had just gotten over a reading slump, however my enthusiasm towards Gabriel and the Swallows just wasn’t there. I found a lacking connection to any of the characters for at least 45% of the book, it took some time, however connection did later develop. Another growing concern I had for this book, was the amount of confusion I had pertaining around the way this story was being told throughout part 1 and for the first little bit of part 2.  I had to extremely focus and reread certain passages to fully understand at times truly what I was reading and comprehending. That for me is unusual; I don’t often find myself rereading passages to understand what’s taking place. Though again, as the story progressed, I became less confused. That would be all of my minor issues with Gabriel and the Swallows.

Now to mention all the ways this brilliant book had me hooked before I even knew what was forth coming.

The overall story of this book was out of this world. The premise of the dream world and Gabriel’s struggles to determined reality was really what peaked my interest. There is multiply times in the story where Gabriel mention’s not knowing which is real and not knowing which one he wants to be his true reality. We as readers also experience a lot of his dream world over the second half of the novel. One of my favourite quotes made by him was this one:

“Everyone I knew was transforming before my eyes.  But I remained the same.  I began to suspect that despite my adult appearance, I was merely a frightened little boy…a child who longed for the night, to live in a dreamland.”  – Gabriel

So seeing his fall and him walking the fine line of insanity was intriguing as well.  The way his mind worked and his thoughts towards this dream world was extraordinary. What made it even better was the character growth after his very dark period.


The way Esther wrote about the setting was also another thing that I really liked about this book. I have never been to another country before, let alone Italy, however every piece of imagery took me to this small town that wasn’t very popular. After finishing Gabriel and the Swallows I had to look up pictures of this place. It sounded so stunning and Esther did a marvelous job on portraying that.

I find it at an oddity that my two favourite characters of this book weren’t I believe the main main characters. My first pick would have to be Orlando Khan. Orlando is one of Gabriel’s only primary school friends throughout the book. I enjoyed the interactions between him and Orlando because I always looked forward to what he would say and come up with. To me, a lot of my favourite quotes from GATS came from him. As the story progresses so does Orlando and Gabriel’s relationship unfortunately resulting in an end to their friendship due to the paths each has chosen; however that doesn’t stop Orlando from welcoming Gabriel to one final conversation of wise words.


The character that I really enjoyed reading about was surprisingly Darlo Gallo. Now through parts 1 and the first few bits of part 2, Darlo is a complete terrible person to Gabriel, however deep down I had felt that all that hate and bully attitude was due to a secret love. Darlo ends up leaving and returning in part 3 when Gabriel has sufficiently gone to college, come back to Orvieto, and enter a complete state of wanting to constantly be in his dream landscape. She ends up sticking around through all of Gabriel stages and the relationship between the two of them heals quite a bit. Now, the thing I like the most about her is the amount she grew as a character and who she developed into. Yes, she was a child when she excluded Gabriel from a lot, however the way she changes and tries to amend for all the heartache she caused him was something else. She is one of my favourites purely due to the fact that I loved the character she became.

In Conclusion, though there were some hiccups for me actually getting really into the novel, and I had a few minor issues. Gabriel and the Swallows should be a novel that is on your wish list. It was beautifully written, executed brilliantly, and overall put together wonderfully. I highly recommend this book.
Posted by Sabrina at 5:30 AM
Email ThisBlogThis!Share to TwitterShare to FacebookShare to Pinterest
Labels: Reviews