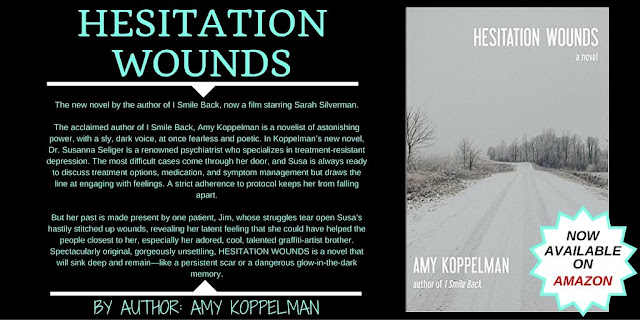 ‘Amy Koppelman has wrangled into the world a marvel of a book in terms of language and character and story.  It should find her the audience she’s long deserved.’ -Mary Karr, New York Times bestselling author of The Liar’s Club and Lit 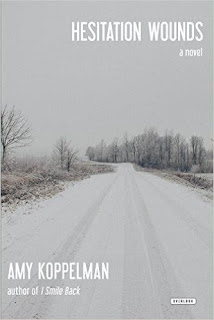 The new novel by the author of I Smile Back, now a film starring Sarah Silverman. The acclaimed author of ​I Smile Back ​ , Amy Koppelman is a novelist of astonishing power, with a sly, dark voice, at once fearless and poetic. In Koppelman’s new novel, Dr. Susanna Seliger is a renowned psychiatrist who specializes in treatment-resistant depression. The most difficult cases come through her door, and Susa is always ready to discuss treatment options, medication, and symptom management but draws the line at engaging with feelings. A strict adherence to protocol keeps her from falling apart.
But her past is made present by one patient, Jim, whose struggles tear open Susa’s hastily stitched up wounds, revealing her latent feeling that she could have helped the people closest to her, especially her adored, cool, talented graffiti-artist brother. Spectacularly original, gorgeously unsettling, ​HESITATION WOUNDS ​ is a novel that will sink deep and remain―like a persistent scar or a dangerous glow-in-the-dark memory.


When I was a little girl, I would sit on the roof and watch you spin around in circles. Arms in air. Palms toward sky. You turned and turned without ever falling. I should have recognized your balance was superior to my own. Instead, I stood, moved my body as you did, round and round, and quickly sank to the ground. You joined me there, leaned back onto your elbows, and smiled at me as I worried about how long the world would spin. Yours rotated on a singular axis, which I, for many years, mistook for purpose. Time spins until it stops spinning. That simple. Later. Older. High. We watched the world spin without our having to move. And now, all these years later—even with distance—it is, still. Perspective, I’ve learned, is intrinsic to equilibrium. Happiness, on the other hand, is a sole operator. Denying you—click clock—until you become older than you ever thought capable. Your hands protruding from dark sheets drag the covers up over your head as you ache to remember and forget.
Uncertain as to which would be a better outcome. The pink morning light casts a glow across the ceiling. I check the time. It’s 6:15 a.m. The train leaves at 8:15 a.m, so we have time. But not too much time. I swing my legs over the bed, grab my glasses. Today is your forty-fifth birthday. It’s hard to believe we haven’t seen each other in nearly twenty-eight years. I understand
intellectually that twenty-eight years is a long time. I was a girl then. I’m a middle-aged woman now. But for some reason it doesn’t feel like a long time ago and I don’t
feel old. I guess there’s some kind of cognitive dissonance at work, because there are still moments when I’d swear you’re alive. Not whole, maybe, but pieces. On Halloween, for
example, a three-foot-tall pirate—partial, I would soon discover, to Almond Joy bars—had your same dark and pensive eyes. I held out the candy bowl, he looked up at me, and in
a flash, a split second between his hold off and my goahead, you were alive.
What I’ve realized as I’ve gotten older is that time isn’t, for both good and bad, a linear construct. The past beats beneath the present, threatening to unmask and reveal
my regret to the world, or perhaps worse, to the fortyfour-year-old woman who greets me every morning in the bathroom mirror. She too brushes her teeth, flosses twice a day, applies bleach strips to combat the inescapable decay. Cavities, receding gums, bone loss. The ability to delude
oneself, and this I can validate from both professional and personal experience, is central to processing loss, yellow teeth enamel the least of it. I keep two pictures beside my bed. One Margo sent a few weeks after your funeral. You’re sitting on the bench at 149th, watching a subway car pass through the station. It has “BENARD IS KING” painted in huge orange and blue block letters in honor of the Knicks’ legendary small forward. Just to the right, in smaller black letters, is your tag.“JAKYL.” If you look closely, you can make out the shell toe of your Adidas resting atop a trashcan. What you can’t see is that my feet are resting there too. Margo wrote “Memory lives forever” on the back of the photo, which is really not true. Memory lives only as long as the people who remember.
I spin.
I am spinning. 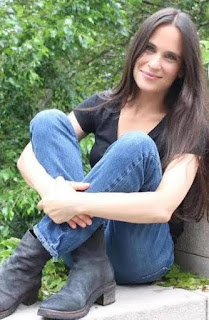 Amy Koppelman AMY KOPPELMAN​ is the author of two critically acclaimed novels, ​A Mouthful of Air ​ and ​I Smile Back ​ . She received her undergraduate degree from University of Pennsylvania, and an MFA in fiction from Columbia University. Koppelman and her screenwriting partner adapted ​I SMILE BACK ​ for the screen. The film, starring Sarah Silverman, premiered at the 2015 Sundance, Toronto and Deauville Film Festivals. Amy lives in New York City with her family. She is an outspoken advocate for women’s mental health.
Find her on Twitter
Posted by Sabrina at 6:00 AM
Email ThisBlogThis!Share to TwitterShare to FacebookShare to Pinterest
Labels: spotlight

eToro is the ultimate forex broker for beginning and professional traders.