"A perfect mixture of magic and mythology. An entrancing story of trust, friendship and well naughty boys. WITCHES are not the only thing walking the earth!"
- BenjaminOfTomes, BookTuber ★★★★★ 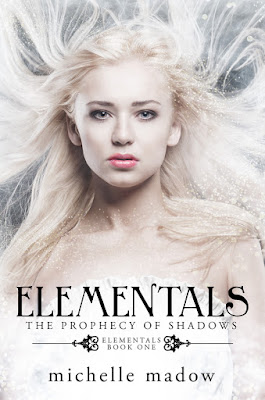 Filled with magic, thrilling adventure, and sweet romance, Elementals is the first in a new series that fans of Percy Jackson and The Secret Circle will love! When Nicole Cassidy moves from sunny Georgia to gloomy New England, the last thing she expects is to learn that her homeroom is a cover for a secret coven of witches. Even more surprisingly … she’s apparently a witch herself. Despite doubts about her newfound abilities, Nicole is welcomed into this ancient circle of witches and is bedazzled by their powers—and, to her dismay, by Blake—the school’s notorious bad-boy.Girls who get close to Blake wind up hurt. His girlfriend Danielle will do anything to keep them away, even if she must resort to using dark magic. But the chemistry between Blake and Nicole is undeniable, and despite wanting to protect Nicole from Danielle’s wrath, he finds it impossible to keep his distance.When the Olympian Comet shoots through the sky for the first time in three thousand years, Nicole, Blake, Danielle, and two others in their homeroom are gifted with mysterious powers. But the comet has another effect—it opens the portal to the prison world that has contained the Titans for centuries. After an ancient monster escapes and attacks Nicole and Blake, it’s up to them and the others to follow the clues from a cryptic prophecy so that they can save their town … and possibly the world.

"Elementals is going to blow your mind!"
-Crossroad Reviews, ★★★★★

"Five glittery stars for being such a compelling read!"
-Andrea Heltsley, Goodreads Reviewer ★★★★★


“There’s a reason we’re required to take Greek mythology.” Blake scooted closer to me, as if about to tell me a secret, and I leaned forward in anticipation. “Did you know that we—meaning everyone in our homeroom—are descended from the Greek gods?”
I arched an eyebrow. “Like Zeus and all of them living in a castle on the clouds?” I asked.


“Exactly.” He smirked. “Except that they’re referred to as the Olympians, and they call their ‘castle in the clouds’ Mount Olympus.”


“So you’re saying that we’re gods?”
“We’re not gods.” He smiled and shook his head. “But we have ‘diluted god blood’ in us. It’s what gives us our powers.”

Michelle Madow grew up in Baltimore, graduated Rollins College in Orlando, and now lives in Boca Raton, Florida. She wrote her first book in her junior year of college, and has been writing novels since. Some of her favorite things are: reading, pizza, traveling, shopping, time travel, Broadway musicals, and spending time with friends and family. Michelle has toured across America to promote her books and to encourage high school students to embrace reading and writing. Someday, she hopes to travel the world for a year on a cruise ship.

GIVEAWAY:
a Rafflecopter giveaway
Posted by Sabrina at 5:30 AM
Email ThisBlogThis!Share to TwitterShare to FacebookShare to Pinterest

Congrats Michelle! I have been a fan from the early days. :)