July Author of the Month

Hello readers! I am opening up my blog again to bookish content. I am still continuously posting and sharing stories about the Black Live Matter movement over on my Twitter. I am no just intermixing some of my own bookish content.
I am starting the month off with an Author of the Month post for Tanaz Bhathena, a YA Canadian author who's release her third book.
So yes my July "Author of the Month" is Tanaz Bhathena, author of A Girl Like That, The Beauty of the Moment and the book that helped me chose her for this feature, Hunted By the Sky.  Her new release, Hunted By the Sky, hit the shelves on June 23rd, 2020. 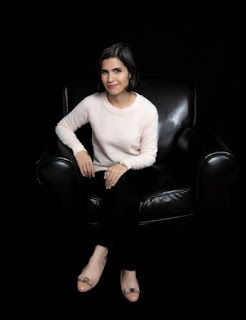 Tanaz Bhathena writes books for young adults. Her sophomore novel, The Beauty of the Moment, won the Nautilus Gold Award for Young Adult Fiction and has also been nominated for the Ontario Library Association’s White Pine Award. Her acclaimed debut, A Girl Like That, was named a Best Book of the Year by numerous outlets including The Globe and Mail, Seventeen, and The Times of India. Her latest book, Hunted by the Sky, is the first of a YA fantasy duology set in a world inspired by medieval India. Her short stories have appeared in various publications including The Hindu, Blackbird, Witness, and Room.
Born in India and raised in Saudi Arabia and Canada, Tanaz lives in Mississauga, Ontario, with her family.

Sabrina: Hello Tanaz, and welcome to my blog. I just want to start off by saying thank you so much for joining me, and being my June Author of the Month.

Tanaz: Thanks so much for inviting me, Sabrina!

Sabrina: While touring for Beauty of the Moment, did you have a favourite event or one that stuck out for you?

Tanaz: I think one of my favourite and most memorable events was the Room of Your Own Book Club in Toronto. Teen girls read the book and asked me questions. One reader said that Susan’s interactions with her mom allowed her to understand her own mother better—which I thought was amazing!

Sabrina: Between fantasy and contemporary, which genre is easier to write? OR does it depend on the type of story you are telling?

Tanaz: It really depends on the story I have to tell. I really enjoy both genres and the challenges they bring. I usually need to feel challenged on some level to get interested in writing a book.

Sabrina: A Girl Like That and Beauty of the Moment are both contemporary stories, did you find one easier to write than the other? Or did the both prove to have their challenges?

Tanaz: I found it harder to write The Beauty of the Moment after finishing A Girl Like That. I’d spent the past twelve years writing gritty short stories and later a whole novel exploring dark issues, so writing a happy contemporary romance was tricky!

Sabrina: If you could have lunch with any 2 fictional characters, who would they be?

Sabrina: What is the last book you read and loved, and why?

Tanaz:The Downstairs Girl by Stacey Lee. It’s a historical novel set in Atlanta and the protagonist is a Chinese American girl who poses as an anonymous advice columnist named “Miss Sweetie.” The writing and research is impeccable and I love the novel’s wit and humor.

Sabrina: Hunted by the Sky releasing on June 23rd is going to be your latest release, can you describe it in five words or less?

Sabrina: Did you have a favourite chapter while writing Hunted by the Sky?

Sabrina: Thank you so much for joining me today on my blog, and for being my Author of the Month for June. I look forward to reading Hunted by the Sky when it releases!

Tanaz: Thanks, Sabrina! I hope you enjoy the book! :)

Description: Gul has spent her life running. She has a star-shaped birthmark on her arm, and in the kingdom of Ambar,girls with such birthmarks have been disappearing for years. Gul's mark is what caused her parents' murder at the hand of King Lohar's ruthless soldiers and forced her into hiding to protect her own life. So when a group of rebel women called the Sisters of the Golden Lotus rescue her, take her in, and train her in warrior magic, Gul wants only one thing: revenge.
Cavas lives in the tenements, and he's just about ready to sign his life over to the king's army. His father is terminally ill, and Cavas will do anything to save him. But sparks fly when he meets a mysterious girl--Gul--in the capital's bazaar, and as the chemistry between them undeniably grows, he becomes entangled in a mission of vengeance--and discovers a magic he never expected to find.
Dangerous circumstances have brought Gul and Cavas together at the king's domain in Ambar Fort . . . a world with secrets deadlier than their own. Exploring identity, class struggles, and high-stakes romance, Hunted by the Sky is a gripping adventure set in a world inspired by medieval India.

Posted by Sabrina at 9:30 AM No comments:
Email ThisBlogThis!Share to TwitterShare to FacebookShare to Pinterest
Labels: Author of the Month
Newer Posts Older Posts Home
Subscribe to: Posts (Atom)