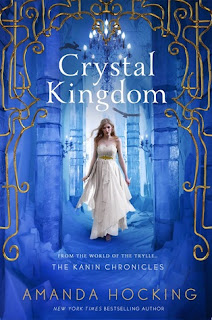 Title:Crystal Kingdom
Author: Amanda Hocking
Published: August 4th 2015 by St. Martin's Press
Length: 404 pages, Paperback
Genre: YA & Teen Fantasy
Synopsis: "Cast out by her kingdom and far from home, she's the Kanin people's only hope.
Bryn Aven - unjustly charged with murder and treason - is on the run. The one person who can help is her greatest enemy, the enigmatic Konstantin Black. Konstantin is her only ally against those who have taken over her kingdom and threaten to destroy everything she holds dear. But can she trust h ...more"

Crystal Kingdom deserves a  9.2 out of 10 rating


This book was quite an end to such an amazing series. It had the right amount of suspense, humor and a bit of romance thrown all together. Hocking's writing style was also great and she always gave a clear picture. There was never a part in the novel where I had felt lost or even confused. That was a good thing because there was a lot that happened in 404 pages. I also loved that the book ended on a good note, especially because there had been quite a bit of tragedy and suspense.

The next best thing about this book besides it's storyline would have to be the characters. Now I would have to say my favorite character would have to have been Konstantin. I was rereading all the pages or lines I tagged in Crystal Kingdom and basically every scene involved Konstantin saying or doing something. He was very serious, especially when the time called for it, but there were scenes where he would loosen up and I think that's what made me like him so much more. I also loved his bravery and the way he helped Bryn and stuck by her side through the worst. Another character that should totally get mentioned is Bryn; the main character of this trilogy. She was the female protagonist and it showed. She had so much heroism in her. Yes, there were times when you would cringe at what she was thinking or saying, but I believe her actions always made up for it. Plus her love for everyone she cared about was so amazing. I also loved Ridley and hers relationship in this book and the development between them. The last character that should get mentioned is Ember. She was one of Bryn's best friends, and although she was one of the characters that stayed within the Kanin walls for this book, her kindness stilled showed through.

There were some deaths in this novel. I won't be saying who or why, but I will share with you that although some were heartbreaking, I understood why they had to happen. The story needed to move in a certain direction and some deaths just had to happen. Yes, I was sad when they happened, but after finishing the novel, I do believe it was for the greater good, and I hope you do too if you get a chance to read this awesome series.

In conclusion, this novel was beyond worthy of being the last in The Kanin Chronicles. I do highly recommend this book for those who read the first two, but also to people who enjoy YA fantasy reads with some romance and suspense tied in.
Posted by Sabrina at 10:11 AM
Email ThisBlogThis!Share to TwitterShare to FacebookShare to Pinterest
Labels: Amanda Hocking, Reviews

Great review! I'm excited to finally get some involvement with Konstantin. From the start of the series, I knew I was going to love his character. I am a little worried about this death you speak of. The death in Ice Kissed was so upsetting, I don't know if I can handle another. I'm happy to find your blog! Amanda Hocking retweeted your review, and I found you that way. :)

Thanks for liking my review! Yes, Konstantin was swoon worthy in this book. There's a lot of scenes that involve him, so I was quite happy. Also thanks for taking a look at my blog! I looked at yours and I absolutely love the style and name! I hope you enjoy the read! I will be looking forward to hearing your thoughts after you have read the book!