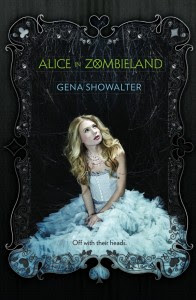 Had anyone told Alice Bell that her entire life would change course between one heartbeat and the next, she would have laughed. But that's all it takes. One heartbeat. A blink, a breath, a second, and everything she knew and loved was gone.

Her father was right. The monsters are real.

To avenge her family, Ali must learn to fight the undead. To survive, she must learn to trust the baddest of the bad boys, Cole Holland. But Cole has secrets of his own, and if Ali isn't careful, those secrets might just prove to be more dangerous than the zombies. ...more"

Alice in Zombieland Deserves a 10 out of 10 rating.


This book had a lot of amazing aspects to it. I will try to mention them all, but be for warned, there will be a lot of love for the characters. Another thing I also want to take the time to appreciate is the amazing story line and premise. I absolutely couldn't put the book down. The writing style for this book was also done really well too.

One character in particular that needs to get mentioned first is Cole. I fell instantly in love with him; from the way he was first described. One key thing I loved, was the fact that he had violet eyes. That in itself was amazing. I also loved how he was a total bad boy but Ali wouldn't believe anyone. I think another thing about Cole was that he appeared to be very mysterious at first, and untouchable. He turned out to be a major bad boy, however it was nice and sweet to notice the amount of care he had for his exclusive group of friends. Another thing that made me happy was his relationship with Ali. It was nice to see he had a soft side to him. Now for Alice or who commonly went by as Ali. She was an excellent main protagonists. She showed tremendous selflessness, along with determination. She lost a lot at the very start of the book, and the way she recovered was stunning. I also really liked that she had a strong will. I again, loved her relationship with Cole. I also liked that she wasn't afraid to tell him what she was really thinking. The last character that I will mention is Kat. She was the prefect best friend from day one. She not only had some great humor, but she was so extremely loyal. I loved that when people started to leave Ali for her associations with Cole, Kat stuck by her side. Another great thing about Kat was that she didn't let her boy (Frosty) run her life. Each and every character honestly deserves some kind of mention because without them the story wouldn't have been the same. I applaud Gena Showalter for writing and coming up with such likable characters. Another thing I would like to point out, is that even the Antagonists were appealing because they were so well written.

The story itself was unique. I had never really picked up a novel before that involved Zombies. I have seen shows that included them and honestly they didn't really interest me all that much. However Showalter's version were quite intriguing and one of the major reasons as to why I couldn't put the book down. For the writing style and aspect of the story, it was really brilliantly done. There were no scenes in the book were it lagged, or bored me. So much love towards Gena and her writing style.

In conclusion, this book was quite good. I believe there was nothing that the story line lacked and the characters were just prefect. I recommend this book to those who enjoy suspense and zombies. Also to those who enjoy YA novels a lot.
Posted by Sabrina at 2:16 PM
Email ThisBlogThis!Share to TwitterShare to FacebookShare to Pinterest
Labels: Gena Showalter, Reviews