The Kiss of Deception {The Remnant Chronicles #1} by Mary E. Pearson 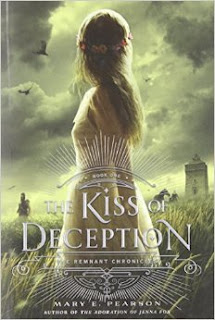 Title: The Kiss of Deception {The Remnant Chronicles #1}
Author: Mary E. Pearson
Published: July 8th 2014 by Henry Holt
Length: 492 pages paperback
Genre: Teen/YA Fantasy & Science Fiction
Synopsis: "A princess must find her place in a reborn world. She flees on her wedding day. She steals ancient documents from the Chancellor's secret collection. She is pursued by bounty hunters sent by her own father. She is Princess Lia, seventeen, First Daughter of the House of Morrighan. The Kingdom of Morrighan is steeped in tradition and the stories of a bygone world, but some tradit ...more"

The Kiss of Deception deserves a 9.3 out of 10 rating.

I would have to say that this book was brilliantly executed. Everything was practically perfect, from the start, to the storyline, to the characters, and then to the finish. It was amazing. Well done Mary E. Pearson.

One of my favorite things about this book was actually the storyline.  It had a lot of different elements to make it so intriguing and amusing. I also liked that at first you weren't to sure who was the assassin and who was the prince. There was suspense, mystery, and romance in the most unlikely parts, which was a nice fix. Every page ended up being a page turner, until the very end when there were no more pages left to turn. The writing was clearly very well done, and I enjoyed having multiple POV's from the three different characters.

The characters were also such a great part to add to the already amazing storyline. I would have to say that my favorite character ended up being Lia, the main heroine. She was strong willed and had fought hard. Lia also never gave up, which was a nice quality to have. Along with being strong willed, she knew how to defend herself and even let a few humorus lines go as well. I also really loved the two male characters. I know that both of them basically deceived Lia, but I felt like they both had better intentions in the end. I also liked how mysterious the two had appeared to Lia. All in all the characters suited the story quite well.

In conclusion I would highly recommend this book to readers of fantasy and suspense, but really I think anyone would enjoy a book like this one.