Chains of Water & Stone (The Griever's Mark #2) By Katherine Hurley 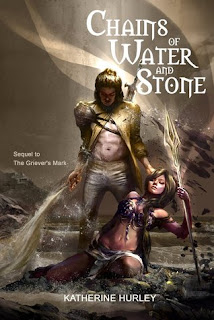 "Who is Logan’s father? The question has been whispered behind his back all his life. He’s ignored it, forced himself not to care, but when Belos starts demanding an answer to this very question, it takes on a new and disturbing significance.


As the race to answer this question begins, others rise in its wake, unearthing a mystery that could shake the very foundation of Earthmaker ...more"

I First fell in love with this series when I read The Griever's Mark (the first in this series).  I thought it couldn't get any better. When I had finally completed the first I needed the second. However this one had yet to come out. So I waited and then finally got my hands on this. It was definitely worth the wait!!

There were certain things about this book that made me like the series so much more.  The characters themselves are brilliantly written and well thought out. I feel like this book made me appreciate the series even more because you got to see the raw emotions of all the characters that didn't get shown in the first book. I love the way Logan & Astarti communicated with each other. Their connection is quite astonishing and I love that sometimes they may say nothing to each other, but they still understood what the other was thinking or what the other needed. I also really loved Horik. I liked the way he interacted with Astarti, and the way he treated her like a little sister was adorable. I also had a lot of respect for him as a character as well.

The story line itself was very intriguing. There was never a moment where I felt lost or confused, even with the two point of views from Logan and Astarti. The story also gave off a lot of emotions as I was reading it. I also really liked that it ended with a cute romantic scene, it was the prefect way to conclude this book and allow readers to still want to read the third.

Overall I suggest reading this book along with reading the first The Griever's Mark. It was well written and I hope you enjoy it as much a I did.
Posted by Sabrina at 2:05 PM
Email ThisBlogThis!Share to TwitterShare to FacebookShare to Pinterest
Labels: Reviews