It's another new month, and with that comes a whole new set reading list in which I have planned for myself. I feel like December came around a little faster than I would've liked, but hey, new books for me to read and get my hands on. I know that I am a little late but hey, better late than never.

My T.B.R. for December has around Twelve books on it, so it should be an interesting month, and hopefully I can get to all the books.

"Alyssa Gardner went down the rabbit hole and took control of her destiny. She survived the battle for Wonderland and the battle for her heart. In this collection of three novellas, join Alyssa and her family as they look back at their memories of Wonderland

In Six Impossible Things, Alyssa recalls the most precious moments of her life after Ensnared, and the role magic plays in preserving the happiness of those she loves. Alyssa’s mother reminisces about her own time in Wonderland and rescuing the man who would become her husband in The Boy in the Web. And Morpheus delves into Jeb’s memories of the events of Splintered in The Moth in the Mirror, available in print for the first time.
This collection expands upon Ensnared's epilogue, and includes some deleted scenes to provide a “director’s cut” glimpse into the past and futures of our favorite Splintered characters." 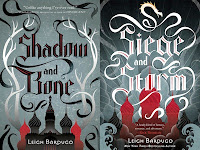 "Set primarily in the fictional country of Ravka, there is a form of magic that exists known as The Small Science. Those who can wield it are called Grisha, powerful practitioners considered to be a part of an exclusive class. Those who do not possess this power are called Otkazat'sya, and function normally as shopkeepers, laborers and soldiers."

"Seventeen-year-old Mercedes Ayres has an open-door policy when it comes to her bedroom, but only if the guy fulfills a specific criteria: he has to be a virgin. Mercedes lets the boys get their awkward, fumbling first times over with, and all she asks in return is that they give their girlfriends the perfect first time- the kind Mercedes never had herself.

Keeping what goes on in her bedroom a secret has been easy- so far. Her absentee mother isn’t home nearly enough to know about Mercedes’ extracurricular activities, and her uber-religious best friend, Angela, won’t even say the word “sex” until she gets married. But Mercedes doesn’t bank on Angela’s boyfriend finding out about her services and wanting a turn- or on Zach, who likes her for who she is instead of what she can do in bed.

When Mercedes’ perfect system falls apart, she has to find a way to salvage her reputation and figure out where her heart really belongs in the process. Funny, smart, and true-to-life, FIRSTS is a one-of-a-kind young adult novel about growing up." 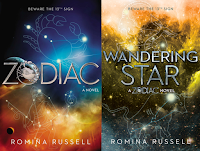 "Rhoma Grace is a 16-year-old student from House Cancer with an unusual way of reading the stars. While her classmates use measurements to make accurate astrological predictions, Rho can’t solve for ‘x’ to save her life—so instead, she looks up at the night sky and makes up stories.

When a violent blast strikes the moons of Cancer, sending its ocean planet off-kilter and killing thousands of citizens—including its beloved Guardian—Rho is more surprised than anyone when she is named the House’s new leader. But, a true Cancerian who loves her home fiercely and will protect her people no matter what, Rho accepts."

"passage, n.
i. A brief section of music composed of a series of notes and flourishes.
ii. A journey by water; a voyage.
iii. The transition from one place to another, across space and time.

In one devastating night, violin prodigy Etta Spencer loses everything she knows and loves. Thrust into an unfamiliar world by a stranger with a dangerous agenda, Etta is certain of only one thing: she has traveled not just miles but years from home. And she’s inherited a legacy she knows nothing about from a family whose existence she’s never heard of. Until now.

Nicholas Carter is content with his life at sea, free from the Ironwoods—a powerful family in the colonies—and the servitude he’s known at their hands. But with the arrival of an unusual passenger on his ship comes the insistent pull of the past that he can’t escape and the family that won’t let him go so easily. Now the Ironwoods are searching for a stolen object of untold value, one they believe only Etta, Nicholas’ passenger, can find. In order to protect her, he must ensure she brings it back to them— whether she wants to or not."

~Trial by Fire by Josephine Angelini~

This world is trying to kill Lily Proctor. Her life-threatening allergies keep her from enjoying many of the experiences that other teenagers take for granted...which is why she is determined to enjoy her first (and perhaps only) high-school party. But Lily's life never goes according to plan, and after a humiliating incident in front of half her graduating class Lily wishes she could just disappear.

Suddenly Lily is in a different Salem - one overrun with horrifying creatures and ruled by powerful women called Crucibles. Strongest and cruellest of all the Crucibles is Lillian . . . Lily's identical other self in this alternate universe. This new version of her world is terrifyingly sensual, and Lily is soon overwhelmed by new experiences."

"This is a world divided by blood – red or silver.

The Reds are commoners, ruled by a Silver elite in possession of god-like superpowers. And to Mare Barrow, a seventeen-year-old Red girl from the poverty-stricken Stilts, it seems like nothing will ever change.

That is, until she finds herself working in the Silver Palace. Here, surrounded by the people she hates the most, Mare discovers that, despite her red blood, she possesses a deadly power of her own. One that threatens to destroy the balance of power.

Fearful of Mare’s potential, the Silvers hide her in plain view, declaring her a long-lost Silver princess, now engaged to a Silver prince. Despite knowing that one misstep would mean her death, Mare works silently to help the Red Guard, a militant resistance group, and bring down the Silver regime."

~Shatter Me by Tahereh Mafi~

"I have a curse
I have a gift

I am a monster
I'm more than human

I am their weapon
I will fight back

The last time she did, it was an accident, but The Reestablishment locked her up for murder. No one knows why Juliette’s touch is fatal. As long as she doesn’t hurt anyone else, no one really cares. The world is too busy crumbling to pieces to pay attention to a 17-year-old girl. Diseases are destroying the population, food is hard to find, birds don’t fly anymore, and the clouds are the wrong color.

The Reestablishment said their way was the only way to fix things, so they threw Juliette in a cell. Now so many people are dead that the survivors are whispering war – and The Reestablishment has changed its mind. Maybe Juliette is more than a tortured soul stuffed into a poisonous body. Maybe she’s exactly what they need right now.

Juliette has to make a choice: Be a weapon. Or be a warrior."


That is my December 2015 TBR, I hope I can get to all of these wonderful books and who knows, maybe I'll even get to some more plus these ones. Do we share any of the same TBR books? Comment below.
Posted by Sabrina at 8:39 PM
Email ThisBlogThis!Share to TwitterShare to FacebookShare to Pinterest
Labels: TBR

I forgot Untamed came out!I hope you get to all of these great books :)

I forgot Untamed came out!I hope you get to all of these great books :)