So do you guys remember that very awesome author who I always talk about, the one with the YA fantasy series? You know, the Air Awakens series? If you haven't already guessed, I am talking about Elise Kova.

Now by judging the title of this post you're probably thinking, "Wh--at--tt, I thought the Air Awakens Series has no more books." Well you are completely correct, but if you haven't been living in a hole the past couple of months you would've known that she's starting another series. A New Adult Fantasy series titled The Loom Saga that will be published through a traditional publishing house. Which also means that us book nerds will be able to walk into a store and purchase Elise's new series.

Anyway, the original cover reveal for The Alchemists of Loom was suppose to take place in September, however due to some technical difficulties the cover was released a little earlier then expected. We also got to receive the synopsis a little early as well, which will also be shared in this post.

So yes, you very well could've already seen this kick ass cover, but guess what, I am going to show it to you again because this cover is pure awesomeness.

NOW without further ado I present to you The Alchemists of Loom's amazing cover... 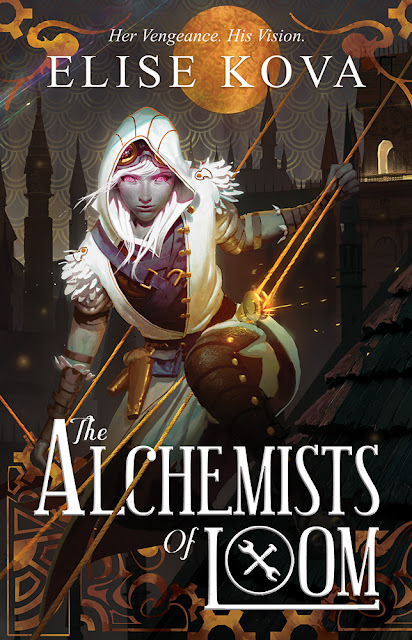 That was probably the exact face I was making when I saw the blown up picture for this book. So I am like in love with the Air Awakens covers, and I thought nothing could ever get any better. THEN, Elise contacts Nick D. Grey to construct this cover, AND BOOM. THE BEST THING EVER HAS BEEN CREATED.


Anyway after my instant love at first sight, I decided to examine the cover, to which then I made a face kind of like...

BECAUSE I started to think about all the possible symbols, however whilst attempting to find things, my eyes were brought to the attention of the background buildings and the fact that Ari, the girl I'm presuming is on the cover is doing something with pulleys and rope. PULLEYS, AND ROPE. Can we just stop and appreciate how badass she looks. Okay, and then and then, because my mind wanders a lot, Assassin's Creed came to my mind, and then Evie Frye came to my mind... 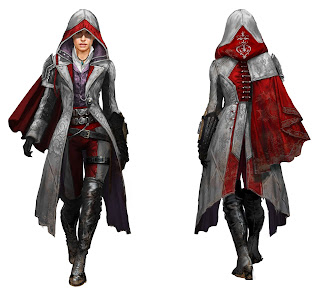 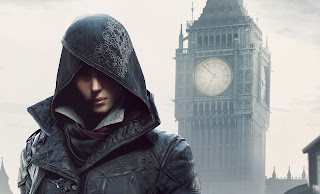 Let's just say I have put Ari high on my list of baddassness (made up that word and I don't even care) because A) she sounds like total good crazy in the synopsis and B) The imagery of Evie Frye haha.

Ari just looks likes she's going to be a character that will never be forgotten, and if she if forgotten she's likely going to hunt you down.

So along with the AMAZING cover we got the synopsis as well... NOW if that cover didn't sell you in, then this sure will...


Her vengeance. His vision.
Ari lost everything she once loved when the Five Guilds’ resistance fell to the Dragon King. Now, she uses her unparalleled gift for clockwork machinery in tandem with notoriously unscrupulous morals to contribute to a thriving underground organ market. There isn’t a place on Loom that is secure from the engineer turned thief, and her magical talents are sold to the highest bidder as long as the job defies their Dragon oppressors.
Cvareh would do anything to see his sister usurp the Dragon King and sit on the throne. His family’s house has endured the shame of being the lowest rung in the Dragons’ society for far too long. The Alchemist Guild, down on Loom, may just hold the key to putting his kin in power, if Cvareh can get to them before the Dragon King’s assassins.
When Ari stumbles upon a wounded Cvareh, she sees an opportunity to slaughter an enemy and make a profit off his corpse. But the Dragon sees an opportunity to navigate Loom with the best person to get him where he wants to go.
He offers her the one thing Ari can’t refuse: A wish of her greatest desire, if she brings him to the Alchemists of Loom.

So since I already know that you must be sold at this point, I am just going to leave the preorder links here for you to reserve your copy.

Posted by Sabrina at 10:15 PM
Email ThisBlogThis!Share to TwitterShare to FacebookShare to Pinterest
Labels: Cover reveal