Guest Post for Time's Alibi made by Husky Harlequin 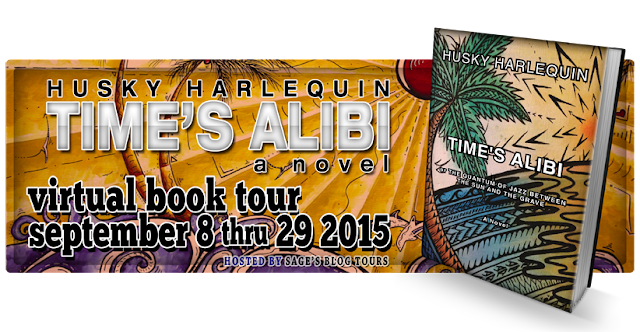 Hello Everyone! Today I get to be one of the lucky people to host a stop on the Time's Alibi's virtual book tour. Joining us will be the author himself explaining how the cover came to be and how it relates to the story. Also don't miss the giveaway at the bottom of this post

Title: Time’s Alibi
Author: By Husky Harlequin
Genre: SciFi, political thriller, alternate history, mystery
Description:
Cancer.  Undetected, it relentlessly devours its host until there is nothing left. Andrew Acheson's grandfather has been searching for a cure since a rare blood born pathogen claimed the life of his beloved wife.

Family. If damaged, it can be the breeding ground for social disease. Greed infected the Acheson clan long ago.  David Acheson, the patriarch, has been missing for over a year and is presumed to be dead. Murdered? Kidnapped? The FBI has no leads. David's heirs can't wait to get their filthy fingers on his pharmaceutical empire.

Discovery.  If misunderstood, it has the power to destroy.  Andrew desires the success and love that have painfully eluded him.  Without his grandfather's guidance, he may never find it.  Suddenly thrust into the center of a conflict with historic consequences, Andrew might be able to survive if he can overcome his flaws, both inherited and self-inflicted.  But first, he must find his grandfather and deal with David's most dangerous invention yet:  time travel. 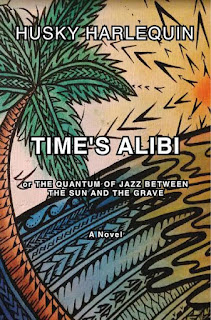 I love the cover to Time’s Alibi or The Quantum of Jazz Between the Sun and the Grave.  It is based on a painting by Tawsh Lavata’i that hangs in my bedroom.  Great, isn’t it?  She grew up in American Samoa, and her work utilizes traditional Samoan Siapo in a modern way.  I had the pleasure of living in American Samoa, a tiny tropical island in the South Pacific, for three years.  As one of the hardest places in the world to visit, it embodies the term “Paradise Lost.”  AmSam wears it on her sleeve.  Beautiful but decayed.  Fragile but resilient.  Lost in time yet forever timeless.


We all know how it feels.  We’ve all been there before, captivated by a moment in time, unable to move forward with life.  Past glory contrasted with present failures that mock us.  Or a decision made at the crossroads that unexpectedly leaves us stranded.  Innocence lost, stolen perhaps by The Wise.  We can fight like crazy to recapture what was lost, pouring our energy, our finite resources into the endeavor, but if we aren’t careful, we may get stuck tilling weeds instead of planting a new garden.  Inspiration, even redemption, can be found in striving for something fresh and new.  Every paradise starts in a greenhouse, of sorts.

The Acheson family, in Time’s Alibi, lives in a metaphorical jungle, long overgrown with neglect.  David, a pharmaceutical magnate and patriarch, laments the loss of his wife years ago from a rare form of blood cancer.  He obsesses in his research lab to the exclusion of his family.  Andrew, his grandson, is floundering, unable to escape a childhood filled with disappointment and wrong turns.  He could develop into a fully functional adult with David’s help, but life takes fateful turn when David accidentally discovers time travel, sucking Andrew into a world of dangerous political consequences.  It might be exactly what Andrew needs to tame the jungle and find his Eden.  That, or it’s a one-way ticket to his permanent demise, pushing up daisies in an unmarked grave.

Pick up a copy of their story.  It is an exciting adventure rooted in SciFi that branches out into a thrilling mystery.  It will leave you pondering life and its many possibilities.

Husky is a lawyer, poet, musician, chemist, and writer from the Philadelphia area.  His high school literature class blew up his brain, exposing a love for story telling.  He's circling back now.  He can't argue in court like Mitch McDeer, drop rhymes like Mother Goose, rock like Sergeant Pepper's Lonely Hearts Club Band, or leverage his skills in the lab like Walter White, but he can write better than Kilgore Trout.  Husky is a lover of ideas, progressive thoughts, and mankind.

Posted by Sabrina at 7:16 AM
Email ThisBlogThis!Share to TwitterShare to FacebookShare to Pinterest
Labels: Blog Tour, Guest Post

Awesome post! This is going on my TBR list. The story sounds great and the cover is just gorgeous.

I also wanted to let you know that I nominated you for the TBR tag. I am sorry if you don't like doing them, I just like to nominate the blogs I keep up with. So if you want to check it out, here's the link:
http://bogdanathebooknerd.blogspot.com/2015/09/tbr-book-tag.html

Thanks for hosting me, Library Luv! Bogdana, I can't wait to hear what you think of the book. I love the cover, too! BTW, one of my best friends is from Romania. Love him to death.