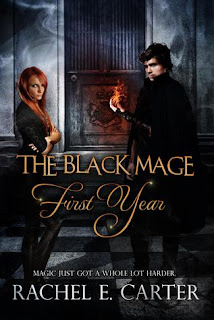 Description:
"Before the age of seventeen, the young men and women of Jerar are given a choice-follow tradition, or pursue a trial year in one of the realm’s three war schools to study as a soldier, knight or mage...

For 15-year-old Ryiah, the choice has always been easy. Become a warrior and leave the boring confines of her lowborn life behind. Set to enroll in the School of Knighthood on the eve of her next birthday, plans suddenly shift when her twin brother discovers powers. Hoping that hers will soon follow, she enrolls with Alex at the Academy instead -the realm’s most notorious war school for those with magic."

This book had been eyeing me for what felt like an eternity. I had heard of it when the author of the Air Awakens series; Elise Kova. Did a signing with Rachel E. Carter. Since then this book has been in the back of my mind. Well to no shock, this book was just as amazing as I thought it would be; quite possibly even more amusing than I anticipated. I give the first book in The Black Mage series a rating of 5 out of 5 stars and a trip to my favourites shelf.

The thing that blew me away the most would have to have been Carter's unique and intricate magic system. I was a little worried getting into this book because I feared it would turn out to be one of the typically magic systems. However that is not the case at all. There were three types of mages, Restoration, Alchemy, and Combat; out of the three the most prestigious was the Combat faction.  Each brought a different component to battles and mock trials, so it was always interesting to see how they all interacted with each other. Within the factions there were always those who surpassed the others, and those were always the people to look out for. I also liked the element of pain casting. It was an interesting and very unique idea to add to the  story that set it aside from other magic books. The idea of inflicting pain to cause sorcery. However the characters who could do this would have to demonstrate excellent concentration during fighting to not have an outburst of casting. So that was really neat to see as well. All in all I was very impressed with the way the magic worked in this society.

The story line itself was also quite enticing. From the beginning all the way to the finishing page, my interested was more than just peaked. I knew that the story would be epic just by reading that first little scuffle scene Ry had within the first few chapters. Throughout the novel we follow the developments and struggles the main character must face in order to survive the trail of becoming an apprentice. The events she must endure show what kind of character Ry is meant to be. I loved reading endless hours of deadly training. I was always interested in finding out what the first years would have to go through to prove themselves.

Another very awesome thing about this book were the characters. Rachel created a handful of main and secondary characters; each had a story and each stole the show every time they were presented. I loved getting the opportunity to read about each. Like the story, the character themselves had so much uniqueness to them. We got the introduction to the main character and her brother (Ryiah and Alex) with a brilliant first scene. The scene allowed us to see that from the very start Ry was a thinker and would be someone very important. Ry was one of my favourite characters. She had such strength behind her. She was put into many difficult tasks; however she not only complete these tasks she exceeded expectations in every way possible. I also liked that Ry has a very stubborn side to her. The next characters must fall as a pair because they were amazing together. This pair would have to be Ella and Alex; Ry's best friend and brother. I loved seeing the three of them interact, but I equally lived seeing the tow of them interact with each other. Alex was definitely a charmer, but it was great to see that Ella gave him a hard time. These were just a few characters I had to mention, but the rest should really all be mentioned as well. Every character had a point and not one was a filler.

So as I was writing the previous character paragraph, I in turn decided that there was one character who needed his own paragraph. The Black Mage series has a prince, and boy is he ever something else. I truly believe I have a soft spot for princes in my heart, but Darren has taken the cake. Okay there may be one other up there, but he is for sure one of the tops. From the start readers are introduced to such a cold and cruel character who thinks he is better than everyone else. However what sets Darren aside from the rest of those people who proclaim they are the best is that he is actually the best. He's terribly mean to Ry at the start, however readers definitely get a chance to see a change in him. I always enjoyed reading about his duels and castings. It was fun to see him exceed expectations and prove himself. This prince needs some work, but every good character does in order to achieve pure greatness.  I really enjoyed him as a characters. I also have a very strong aspiration to start sketching this lovely prince.

In conclusion, everything about this novel was so well planned out, and I am very grateful for the opportunity to read it. Rachel has created quite the master piece and I can't wait to begin my journey in this series. I would highly recommend this book to those who enjoyed Air Awakens by Elise Kova. I would also recommend this to those who enjoy reading about casting and battle. If you do pick this up, I hope you enjoy it as much as I have. 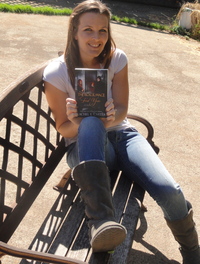 Rachel E. Carter is a young adult author who hoards coffee and books. She has a weakness for villain and bad boy love interests. When not writing, she is usually reading, and when not reading she is usually asleep. To her, the real world is Hogwarts and everything else is a lie.


The Black Mage is Rachel’s first YA fantasy series, with many more to come.

Posted by Sabrina at 3:52 PM
Email ThisBlogThis!Share to TwitterShare to FacebookShare to Pinterest
Labels: Reviews