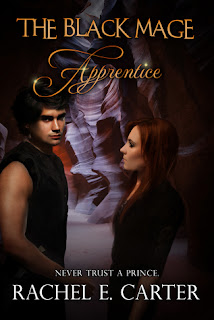 Description:She survived a trial year at the Academy, but that was just the easy part…

Now sixteen-year-old Ryiah is an apprentice of Combat, her school’s most notorious faction of magic. When she finishes she will be a mage, but in order to do so she has to survive four years with a training master she hates and her old nemesis, Priscilla. To make matters worse the unwanted attraction Ry feels for her sometimes-friend-sometimes-rival Prince Darren is at an all time high – even though he is betrothed to the very girl she can’t stand.

Really, the only bright spot to Ryiah’s new life is the time she spends with her friends, including an older apprentice named Ian, who she finds herself thinking about quite often.

Apprentice is book 2 in The Black Mage series by Rachel E. Carter. I absolutely fell head over heels for this series and its concepts. I really loved the first one, however I do have to say that this one of my favourites so far. We see more character development, as well as story development. I finished this book in one day due to my addicted to this book and it's characters. I would rate Apprentice 6 out of 5 stars.

I am just going to start off this review by saying YES, there is a love triangle. For those who hate them and could never fathom reading another book with a triangle, fear not, for Apprentice's triangle actually gets revolved within this book. I was really worried when it was introduced. I hate falling in love with two of the characters and not wanting the character to pick either due to the fact that I want them all to myself. This did happen, because let's face it, Carter created two devilishly handsome young men. Both were cunning in there own ways. I do think though that this triangle gave us as readers an insight on a thing or two. The first would be witnessing that the main character Ryiah, could either have the easier path with the well rounded boy, or choose the difficult path with the egoistic boy. I won't reveal which boy she does choose, but I really did enjoy reading about both opportunities that were being presented.

As I mentioned in my review for First Year, Rachel knows how to execute the story and the world's true potential. We were taken to many different settings in this book; due to the constant training and field work required. Each one was described and portrayed in the most brilliant way possible.I loved getting the chance to see more unique settings. I also liked seeing the people in each area as well. I think one of my favourite settings would have to have been when Ry was on the ship. It was super interesting to read about.

This book in the series should also be titled as "Emotional Rollar-coaster Ft. Darren". We, as readers are subjected to the many sides of Darren throughout this book in particular. You know how there is 50 shades of grey? Well there are like 100 shades of Darren. This wasn't a bad thing most of the time, it just induced pain in my heart due to the many mood swings. I will say however that within the last few chapters all his emotional mood swings get redeemed.

In summary, if you have read the first book in this series, then it's totally worth continuing. If you haven't read the first book, then I highly suggest picking it up so that you can get to this book. I loved this book so much, and Rachel continues to shock me with her skills.

Posted by Sabrina at 11:11 PM
Email ThisBlogThis!Share to TwitterShare to FacebookShare to Pinterest
Labels: Reviews