Hello Everyone! Today's special post will be for Thief of Lies blog tour hosted by YA Bound Book Tours. I will be doing a honest review. I was also provided with a Hardcover copy from the author, however that does not affect my views on this book.  Also don't forget to check out the giveaway at the bottom of this post. 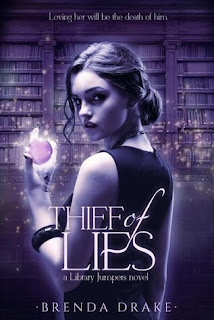 Description:"Gia Kearns would rather fight with boys than kiss them. That is, until Arik, a leather clad hottie in the Boston Athenaeum, suddenly disappears. While examining the book of world libraries he abandoned, Gia unwittingly speaks the key that sucks her and her friends into a photograph and transports them into a Paris library, where Arik and his Sentinels—magical knights charged with protecting humans from the creatures traveling across the gateway books—rescue them from a demonic hound.
Jumping into some of the world's most beautiful libraries would be a dream come true for Gia, if she weren’t busy resisting her heart or dodging an exiled wizard seeking revenge on both the Mystik and human worlds. Add a French flirt obsessed with Arik and a fling with a young wizard, and Gia must choose between her heart and her head, between Arik's world and her own, before both are destroyed"

I would give this book a 9.8 out of 10 rating for multiple reasons. From the fast paced story line, to the brilliantly written characters, Thief of Lies is sure to stick in around in everyone's mind for a long time. There were a lot of components that made this book so different from others in it's genre, such as the plot line, design of the world itself, and the characters. Every single aspect of this book mesmerized me, and kept me enticed throughout the whole novel.

For starter's I must mention that the cover is probably what drew me in first. The aesthetics is the reason why I even wanted to read the blurb on the back. First off the colours are planned so perfectly and it entices people's eyes. Then you have the  brilliant display of books in the background and the subtitle saying "A library Jumper's novel". Now as a enthused reader that already sold the book for me. Next you have the caption stating that loving her would be the death of this said him. Theories were already forming in my head before I even cracked open the book.

Another thing Brenda Drake excelled at in this book were her characters. Each brought their own element to the story line and made me feel all kinds of emotions towards them all. It was also nice to easily connect with the main characters and see their general points of view.
Gia is the main leading female protagonist, and leading she definitely was. A Mystic world, which she knew nothing about was thrust upon her and I believe she handled every new situation well. She had to face things that she thought were all just fairy tales and nightmares. Gia also had to willingly part with people whom she had grown up with her entire life. She took fast to her training and excelled brilliantly in that as well. Gia is the type of character that every good YA book needs to have. She was strong willed and stood up for herself and for those she loved, but she also let her emotions flow as well.
Arik was probably the second leading character in this series to say the least. He was what caught Gia's eye in the first place, and kind of the reason why the Mystic world was opened up to her. Ark is a Sential group leader and knows how to navigate himself around weapons. Alongside being amazing support for Gia and never being impatient, he was equally swoony. I could've read endless amounts of pages that would be dedicated to Arik alone. Arik was the complete package, he had the wits, smarts, leadership, and looks to be a very awesome leading male character in Thief of Lies.
So.. alongside Arik was this other leading male who wasn't introduced to the readers until around halfway through the book, that character was Bastien. He is a wizard, and a very good one at that. Bastien wit and humor never failed to make me laugh and smile. At first, I kind of had a deep grudge against him, however as the story progressed I found it hard not to love him. He experienced quite heartbreaking events and I had felt so sorry for him. I dare say that Bastien may be one of my favourite characters in this book alongside Gia... I may even like him a little bit more than Arik.
Overall not only did the main characters show tremendous strength and wit, but the secondary characters were just as strong and witty as well.

Brenda Drake, the youngest of three children, grew up an Air Force brat and the continual new kid at school until her family settled in Albuquerque, New Mexico. Brenda’s fondest memories growing up is of her eccentric, Irish grandmother’s animated tales, which gave her a strong love for storytelling. So it was only fitting that she would choose to write young adult and middle grade novels with a bend toward the fantastical. When Brenda’s not writing or doing the social media thing, she’s haunting libraries, bookstores, and coffee shops or reading someplace quiet and not at all exotic (much to her disappointment).

a Rafflecopter giveaway
Posted by Sabrina at 7:03 AM
Email ThisBlogThis!Share to TwitterShare to FacebookShare to Pinterest
Labels: Blog Tour

Love your review! A stunning review for what is an equally as stunning book :)