November Author of the Month & Interview 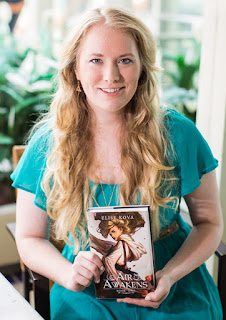 Elise lives in Saint Petersburg, Florida, where she’s currently working on the next installment in her debut YA fantasy series: Air Awakens. She enjoys video games, anime, table-top role playing games, and many other forms of “geekdom.” She loves talking with fans on Twitter (@EliseKova) and Facebook (/AuthorEliseKova). Visit her website, EliseKova.com/, for news and extras about her books!

You can get in touch with Elise here:

I would like to take the time before you read the Interview to thank Elise for taking some time to partake in this. She was quite busy, but was sweet enough to agree. Enjoy

1. Were there any authors or stories that inspired you to become a writer?
Elise: I read a lot growing up. My parents were super supportive of the habit and I always had access to books of all shapes and sizes. They didn’t really hold me back from reading anything. My parent’s mentality was that if I was old enough to pick up the book, read through the words, and be interested, then I was old enough to have discussions on the topics contained within. So I had an odd mix of Stephen King (one of my mom’s favorites), Tolkien (my dad’s), Robert Jordan (my sister’s), and then whatever else I threw in there by finding on bookshelves.

So it’s really hard for me to say “oh this book was it.”
That being said, when I think of all the books I read growing up there were a few in my early years when I started experimenting with storytelling that I really enjoyed. They were (in no particular order):

2. Where did the inspiration for Air Awakens come from?
Elise: I feel like most people know the answer to this one by now, I’m so not shy about it! I got back into writing in 2012-2013 while living in Japan. I made a lifelong friend while I was there who was an aspiring author and she was really inspirational for me. Talking about, and reading, her story was so much fun for me that I started thinking about writing again.


At the same time I heard Zedd’s song “Clarity” for the first time. I love EDM (Electronic Dance Music) for the rhythms and usually evocative lyrics. Clarity put a picture in my overactive imagination of a girl crying at the center of a magical windstorm and a man struggling at all costs to get to her. I considered the questions the song posed, “Why is their love tragedy/insanity? Why is it clarity?” When I had the answers I basically had the initial premise of Air Awakens and it was a story that was begging to be told.

3. Which character from Air Awakens was the most challenging to write?
Elise: I swear, asking me to choose between characters for anything is like asking me to pick if I like my left or right foot better. Both, all? Each of the characters have their own quirks about them that make them a lot of fun, and a pain, to write.


I think in the beginning of the series Aldrik was the most difficult for me to write. The man is so shut off from the world that, as an author, finding logical reasons for him to open up at all was tough. He’s also very much not the man he seems in some ways, and very much IS in other ways. So it’s trying to balance that perception for the reader of who he really is and why he acts the way he does.


Later on in the series Vhalla goes through some things and makes some choices that are logical, and the right decisions for her character, but just annoy me as a person. I won’t say any more, but that was tough.

4. Which character from Air Awakens was the most fun to write?
Elise: For the first book I’d have to say Fritz or Baldair for different reasons – that you can likely guess if you’ve read the books.


Later on in the series there’s another character that was only mentioned in book one (I’ll let everyone try to guess who as things progress) that’s quite a bag of cats and as a result is great fun to write.

5. What is one thing that you need to have while writing (Food, Coffee, Music, Etc.)?
Elise: Music, oh my gosh yes, music. That should be apparent by the fact that the entire series was inspired by a single song. Needless to say, a lot of other songs go along with different points in Air Awakens and describe different characters for me along the way.


From the standpoint of my creative process, when I’m drafting, music helps a lot mentally. I listen to a song that “fits” a certain scene while I’m drafting and then if I have to stop and come back later I can just play the song again to snap me right back into the right mental place. This is really helpful for drafting quickly because I don’t have to “fall out” of the right mindset and then waste time getting back into it.

6. How many books do you plan to have in the Air Awakens series?
Elise: I originally drafted Air Awakens in its entirety on FictionPress starting back in 2013. These drafts are five books long. However, the last book is a 250,000 word behemoth that is going to need to be tamed. A lot also changed as the series evolved and was rewritten in the initial books, so that will alter how the last book needs to be approached. Ideally, I’d like to keep the series five books long. But I’m also not going to force it, if the story ends up needing six books then it’ll be six. I should have a better idea by the time book three is out

7. What is your favourite quote or scene from Air Awakens?
Elise: Favorite quote is likely the very last line of the book.
Chapters 12, 15, and 22 are my favorite chapters.

8. If you could have any Affinity from your book (Firebearer, Windwalker, Waterrunner, Groundbreaker), Which would you choose and why?
Elise: I think I’d really enjoy being a Firebearer, they’re pretty awesome. Plus, I get scared easily and I like the idea of being able to summon a light whenever I needed. I also have naturally curly hair, and the ability to use my fingers as flat-irons would be super awesome and make my morning routine so much faster.

9. When you aren't busying yourself with writing, what do you spend your free time doing?
Elise: Free time? I have heard of this mysterious thing… tell me more. No seriously though I’m usually working. I have a 9-5 that pays the bills while I’m seeing if writing can become a full-time job. When I get home I’m usually working on Air Awakens related things. As an indie author I am a one-woman show. I have to design and order all my promotional goods, ship books, manage my Street Team, build and manage my own website, do all the cover designs (zwxArt does the artwork but I do all the text layout), make sure I spend as much time as I can talking to people who’ve read Air Awakens. That’s usually all I do.


But! That’s not a “real” answer… I’m also a founding host of an anime podcast (Anime Addicts Anonymous), so I watch a lot of anime and talk about it every Sunday. I love playing video games as well, though I usually end up watching my husband play while I write or edit… And then steal the controller when he wanders away for food or something.

10. What's one piece of advice you would give to an aspiring writer?
Elise: Decide what you want, and don’t give up.
I start with “decide what you want” because this is the most important thing, and there are no wrong answers. Don’t let others define success for you. If you just want to write a “silly little story” then do it! If you want to write the next transformative piece of literature – great! I firmly believe that if I don’t have fun writing something I can’t expect anyone else to have fun reading it. So when I started writing Air Awakens I made the conscious decision that I was not out to transform literature or fantasy as the world knew it. I wanted to write a fun story with loveable characters that people would enjoy reading.

I also say “decide what you want” because this changes if you want to publish. Indie or traditional publishing demands a lot more than just writing a story for fun for you or your friends. You’re going to have to make some sacrifices because you or someone else will be making a monetary investment on your book that returns are expected upon. It’s not a bad thing, it’s just the nature of the beast. So if you want to publish have a clear goal for what you think your success will look like (and be reasonable, we’d all love to be bestsellers, but expecting that would likely lead to disappointment).

After you decide what you want pursue it, relentlessly, tirelessly, and aggressively. Cry, beg, barter, scream, throw a tantrum, write your goals on your bathroom mirror so you see them every morning, whatever it takes. Know what you want and don’t stop at anything until you have it.

And that concludes my Interview with November's Author of the month. Thanks again for the opportunity to interview you Elise, it was a lot of fun and such a honor.

Posted by Sabrina at 9:20 AM
Email ThisBlogThis!Share to TwitterShare to FacebookShare to Pinterest
Labels: Author of the Month