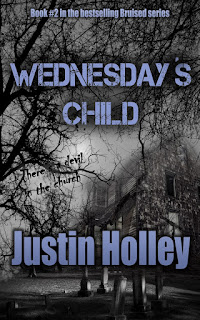 Still living within the clutches of the blood oath from her youth, Tracey now helps the cops investigate strange homicides—those involving the supernatural. So, when a psychology student, who calls herself Wednesday, spouts gibberish about a devil in the church stealing her unborn baby, Tracey knows her brand of help might be needed. The next day, the student is found butchered inside a pentagram, insides missing, and Tracey must determine if the murder is garden-variety or if the town’s demonic forces have returned.

When a second psychology student, who calls herself Thursday, disappears and is feared dead, Tracey calls on the only person left alive who shares her traumatic past. Soon, Tracey and Jason become collateral targets of a flesh-and-blood killer with an aptitude for making deals with the dead. Now they have to solve the ritualistic murders or Tracey and Jason might just become the next sacrifice."
**I received a copy of this book provided by the author, however this does not change my opinion or view of this book**

Wednesday's Child deserves a 8.9 out of 10 rating

This book was certainly different from the first novel Bruised. It not only was told from the POV of one of Jason's Childhood friends, but the story itself was also quite unique. I did enjoy this book a lot more than the first. I also believe the character's were a lot easier to connect with along with also having a very well written story line.

I think one of my favourite parts about this story was that it was told in the POV of Tracey. It was easier for me to connect with the main character, and it was interesting to read what went on in her head. The story itself was also very well written. There was never a point in the novel where it bored me, also I practically never wanted to put the book down. I liked that this book had a lot more to do with a murder mystery, along with the development of Jason, as well as Tracey. Another interesting aspect was to bring in Jason's kids. It was neat to see the way Tracey first handled them, to how she ended up handling them near the end of the book. I also liked the development of the case, the killer was never overly obvious, and it was well paced. Overall the book had a great story line.

Another great thing about this novel was the characters. One of my most favourite characters from Bruised (The first in this series) was Tracey. So you could only imagine how happy and thrilled I was to find out that the story would be told from her POV. It was always amusing to read her thoughts about certain characters, as well as her reactions to some events. I also loved the way she connected with Miles and then tried to connect with Janey (Jason's two kids). It was also very touching some of the moments between her and Miles. She was also written so well, so bravo to Holley. Another character I really want to mention is Jason's son Miles. I know that he's a kid, however he always seemed to lighten the atmosphere. I also really enjoyed how kind he was to Tracey from the start. I don't believe he ever disliked Tracey for any reason whatsoever. I also liked how brave this kid was; there were numerous amounts of situations that he had to go through, and for each and every single one of them he handled it so well. The last character that made this novel so good was Jason himself. He was the originally story teller in book 1 so it was weird at first to not read what he was thinking deep down. I loved how much he grew as a character, especially with certain situations regarding his wife Lindsay. Though I loved having him in this book along with his children, I would have to say that at some points I didn't quite understand why he attended all the crime scenes or questionings with the police. I can't fully say, however I am pretty certain he never really aided them in any way. Though he was the father of some pretty important children, along with being the main character in the first book, it still left me with those questions. With that, I do have to say that the characters were also well written.

Posted by Sabrina at 7:08 AM
Email ThisBlogThis!Share to TwitterShare to FacebookShare to Pinterest
Labels: Reviews

I haven't read anything from Justin, yet. I might give Bruised a try after the first of the year. :)