Welcome back to Alexis from I'M MAD FOR BOOKS, LUV and mine monthly book tag.

Every month we thought it would be fun to come up with a theme and to go along with that chosen theme, a tag. However it wouldn't be just your average tag, the questions would relate to books which in the end will also relate back to our theme for that month. So I guess you could call it a book tag.
To see the officially launch page click here 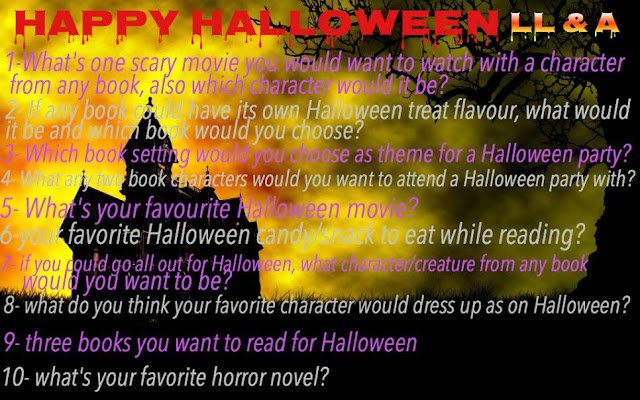 
3) Which book setting would you choose as theme for a Halloween party?
I would throw a Zombie Alice in Wonderland themed setting, so I guess a cross between Gena Showalter's White Rabbit Chronicles and A.G. Howard's Splintered series setting

4) What any two books characters would you want to attend a Halloween party with?
*I would like to attend a party with Jenara from Splintered and Baldair from Air Awakens. I feel like they would be the most fun to go to a party with.

6) What's your Halloween candy/snack to eat while reading?
My favourite thing to snack on is Twix Bites... they are super delicious.

7) If you could go all out for Halloween, what character/creature from any book would you want to be?
If I could go all out and be any character I would want to dress up as Vhalla from Air Awakens, but when she's in her armor. Though I also wouldn't mind being the Library apprentice Vhalla.


8) What do you think your favourite character would dress up as on Halloween?
I would love to see Quinn from Summer on the Short Bus dress up as Zac Efron from High School Musical, because he is referenced as looking like him... LOL

9) What are three books you want to read for Halloween?
I want to read at least one Stephan King book, Asylum by Madeleine Roux, and Library of Souls by Ransom Riggs


I encourage anyone to do the tag! Don't forget to tell either Alexis or me so we can link you to our posts :D Happy Halloween everyone and enjoy the rest of October

Posted by Sabrina at 7:14 AM
Email ThisBlogThis!Share to TwitterShare to FacebookShare to Pinterest
Labels: LL & A's MBT