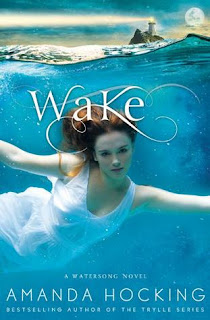 Title: Wake
Author: Amanda Hocking
Published: August 7th 2012 by St. Martin's Press
Length: Hardcover, 309 pages
Genre: YA fiction
Synopsis: "Fall under the spell of Wake—the first book in an achingly beautiful new series by celebrated author Amanda Hocking—and lose yourself to the Watersong.
Gorgeous. Fearless. Dangerous. They're the kind of girls you envy; the kind of girls you want to hate. Strangers in town for the summer, Penn, Lexi and Thea have caught everyone's attention—but it’s Gemma who’s attracted the ...more"


This book gave me a lot of mixed emotions. I really didn't quite enjoy it at first, then I was loving it, then hating it again, and finally loving it once again. I picked up this book after reading Amanda Hocking's Kanin Chronicles because I absolutely loved her writing style. I wanted to jump into this book and instantly fall in love. However that unfortunately didn't quite happen. I found the book to have a slower start than I would've liked. I was almost halfway through the book before I found out what the mysterious girls were, and for the story to somewhat actually begin. After getting through the first half of the book, I did end up loving the second half. I also really enjoyed reading about certain characters.

This was my first time reading about this kind of topic before. I wasn't too sure if I was going to love the whole Greek mythology, with a mermaid/siren twist. In the end it was an interesting thing to read about. I may even say that it was the thing to keep me from putting the book down at times. The story was well written; I just wished some things could've occurred sooner. Though I had some problems with the storyline itself, I did enjoy most of the characters.

I had read in this POV before, so it wasn't to hard to adjust too, but I did have a hard time connecting to Gemma. The character which the story was revolving around. I really wanted to like her, but there was a lot at first that had happened, and I just didn't fully understand her choices towards somethings. As well as to why she didn't confide in her sister for help. One thing I loved about this novel was the sisterly relationship between Harper and Gemma. It was nice to see how much Harper worried over her younger sister. Yes, maybe it was a bother at times, but it's sweet to know someone cares about you that much. I also liked their relationship with their father as well. Since it was only the three of them living together, they all cared so much for each other and it was just brilliant. So I was just so confused with Gemma as to why she never told her sister anything or why she never asked her for help. I highly think Harper would've at least tried to help her, but then at the same time maybe that's why Gemma didn't want to tell Harper. If that was the case, which it probably was, I can kind of understand why she never bothered to explain things.

So there is always this one character in Amanda Hocking's books that I fall deeply in love with. In the Kanin Chronicles it was Konstantin, in the Watersong series it's Daniel. Oh my he is prefect. I loved his random unexpected meetings with Harper at first and how they were really awkward.  Then I also loved how he sweetly hinted at things. I also thoroughly enjoyed his humor. Another thing I liked about him was that whenever Harper needed his help, he never asked why, his first question was always "How can I help?" I can't wait to see what part he plays in the next novel.

Amanda Hocking did prove to write another great book. Even if the first half was a bit slower, I still fell completely in love with this world and characters. I am intrigued as to how book 2 will play out and hopefully I can get my hands on a copy soon.

In conclusion, I have said what I liked about this novel and what I didn't like. Overall there was a lot more loving this novel than disliking, so I do totally recommend this book. I would say this book can offer a very huge viewing audience for those who like YA and myths.

Posted by Sabrina at 10:20 AM
Email ThisBlogThis!Share to TwitterShare to FacebookShare to Pinterest
Labels: Amanda Hocking, Reviews