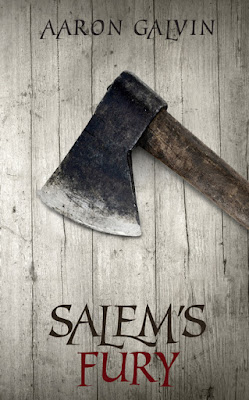 Synopsis: "Sarah Kelly fears a father’s sins are revisited upon the children.
Her sister believes different. Adopted by the Miamiak and raised in the wilderness, Rebecca shares no such concerns. For her, memories of their early life and of Hecate’s attack remain dim.
But history condemns those who neglect the past.
When a war party brings news of a neighboring tribe attacked for harb ...more"

This book's POV is Rebecca Kelly, whereas in Salem's Vengeance it's POV is Sarah Kelly; Rebecca's eldest sibling and only sister. So overall I got a different feel for the book than I did in the first. The story also took place 15 years after the events in Salem's Vengeance.  I still loved all the characters, but I also felt that this story had a lot more action and sorrow in it then the first.

Now for the storyline. I believe this one to be a little better than Salem's Vengeance. It kept me going and no parts were a slow read for me. Throughout the book it had jumped settings to a lot of different scenery and it was a nice change. I do have to admit that this book should come with a prepackaged box of tissues though. There were a lot of deaths and some of those death were even quite shocking and unexpected. This book definitely achieved the status of "Emotional Rollarcoaster".

Now for the characters. In my review of Salem's Vengeance I had said that the characters were my favourite part of the novel, however in Salem's Fury I would have to say the storyline was. It's not that the characters weren't great becuase let me tell you, Galvin did an awesome job at writing them; it was more for the idea that a lot of them ended up being killed. Which at the time was quite upsetting, but I did understand why deaths had to happen. So it was kind of like I didn't want to get to attached to some because they may end up dying. Though Priest and Bishop still remained to be my favourite characters. Overall the characters were written well, it was just the way some of them came to an end and the total of how many actually died, that was shocking.

In conclusion, this novel was just as brilliantly written like the first, and I can't wait to get my hands on the third and final installment of this series. I do recommend this to those who liked the first, along to those who are intrigued about the Salem witch trials.