The Heart of Betrayal {The Remnant Chronicles #2} by Mary E. Pearson 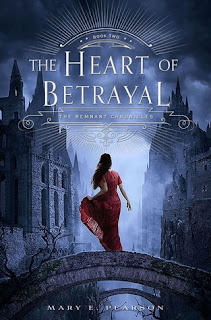 Title: The Heart of Betrayal
Author:  Mary E. Pearson
Published: July 7th 2015 by Henry Holt and Co.
Length: 470 pages, Hardcover
Genre: Teen/YA Fantasy & Science Fiction
Synopsis: "Held captive in the barbarian kingdom of Venda, Lia and Rafe have little chance of escape. Desperate to save her life, Lia's erstwhile assassin, Kaden, has told the Vendan Komizar that she has the gift, and the Komizar's interest in Lia is greater than anyone could have foreseen.
Meanwhile, nothing i ...more"

The Heart of Betrayal deserves a 9.9 out of 10 rating

This novel had everything a novel needs to be an almost perfect rating. It was an amazing sequel to The Kiss of Deception. Along with having an amazing storyline, heart throbbing characters, and a brilliant writer behind it all.

As I read along, every chapter became better than the previous one. Once I had gotten halfway through, there was no putting the book down until I finished. I liked the storyline in this one more than I did in The Kiss of Deception; which I never thought could be possible. The Heart of Betrayal had a little bit of everything. There were times of laughter, sorrow, suspense, heartache, and romance. Also this book kind of ended on a some what cliff hanger, so I am eagerly awaiting the final book.

Where do I even begin for my love towards the Characters. Yes, parts of this book would definitely be considered to be a love triangle. Though parts of me feel as though its a love triangle that is leaning towards one boy more than the other. It also saddens me, because unless something changes in the third; which I mean is always possible. I believe I am on the side of the boy who won't be with her in the end. However, I guess I will just have to wait for the final installment in this series. I didn't say any of the names because I don't want to spoil it for those who have not yet read the book yet. In this book I believe that there was a lot of personality development for almost every character. It's weird to admit this, but in some scenes I felt sorry for the Komizar even if he was portrayed as the antagonist. Lia also showed tremendous strength throughout this novel. I think I liked her even more in this one.  Overall great job on the characters.

Mary E. Pearson is such an amazing writer. She definitely knows where to pull readers in. I liked her writing style a lot. I also found that there were no parts in either of her novels where the story kind of lagged.  She also did a brilliant job at writing the characters as well.

In Conclusion this book was absolutely stunning and I highly recommend it to those who read the first one, also to those who enjoy fantasy & YA reads. Though I do caution those who don't particularly like love triangles. When you do pick this novel up, I wish you a happy reading.

Posted by Sabrina at 11:27 AM
Email ThisBlogThis!Share to TwitterShare to FacebookShare to Pinterest
Labels: Mary E. Pearson, Reviews