This book has been on my TBR for quite some time, yes I know it's a newly published book. However I have wanted it from the moment I saw it. What could go wrong with 4 horsemen and demons, nothing regarding the story line, the character just may have to endure some pretty intense fights. Also since I gave this book a 4 star rating I will be sharing four of my favourbale quotes from Riders. 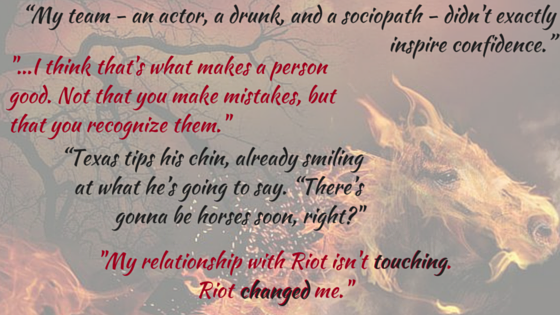 I have been wanting to read this book since the day it came out. Everything about it intrigued me, and lets just say that I have a soft spot for things revolving around the four horsemen. I am always very interested with that topic. So when I came across this book I was so excited. With that all being said, it also meant that I had very high expectations for this book. I can say, that after thoroughly enjoying this book, it not only meant my expectations but exceeded them as well.

I loved the point of view in which this book was told in. It was a neat idea to have him Gideon presently being detained by officials, and in order to find out more information about his friends he had to describe the events that unfolded before being detained. I loved that Gideon was telling the story from first person because he was quite the entertaining character. I also liked the idea that he was explaining past tense but there was the current things (such as the scenes with certain "FBI" reps) happening in Present. As much as I thought this story suited the POV it was written in, I did find it challenging to get into the story at first. I found it a tad but confusing to understand what was going on within the first couple of chapters, and found myself rereading a bit to understand. However once I got into the grove of things, the story started to pick up.

I found the story to be quite intriguing as well. It had a lot of very unique aspects to it such as the while premise with the reincarnation of the horsemen. However I did find it to lag as well. Somethings that I thought to be important to the story were rushed, and other components that got rather boring were to drawn out. With that being said though it did not taint my feelings towards the books in general.

Overall I highly recommend this book to those who YA realistic with a fantasy twist. If you pick up the book I hope you enjoy it! 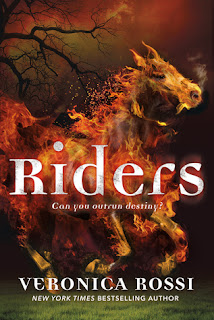 Title: Riders {Riders #1}
Author: Veronica Rossi
Publisher: Tor Teen
Publication Date: February 16th, 2016
Synopsis: "Nothing but death can keep eighteen-year-old Gideon Blake from achieving his goal of becoming a U.S. Army Ranger. As it turns out, it does.
While recovering from the accident that most definitely killed him, Gideon finds himself with strange new powers and a bizarre cuff he can’t remove. His death has brought to life his real destiny. He has become War, one of the legendary four horsemen of the apocalypse.
Over the coming weeks, he and the other horsemen—Conquest, Famine, and Death—are brought together by a beautiful but frustratingly secretive girl to help save humanity from an ancient evil on the emergence.
They fail.
Now—bound, bloodied, and drugged—Gideon is interrogated by the authorities about his role in a battle that has become an international incident. If he stands any chance of saving his friends and the girl he’s fallen for—not to mention all of humankind—he needs to convince the skeptical government officials the world is in imminent danger.
But will anyone believe him?"
Posted by Sabrina at 8:00 AM
Email ThisBlogThis!Share to TwitterShare to FacebookShare to Pinterest
Labels: Reviews

You are really working on getting out the reviews! You are putting me to shame. Big time! Well done. :)

I've been trying to write a review as soon as I finish a book. That way it's at least in my drafts as a option. Especially with school starting up very soon! Thanks for all the wonderful comment LaLa!! They make my day :)