ARC review~ The Inexplicable Logic of my Life

~Review~
This book is about finding yourself, finding people in your life who will stick around, and accepting things that mean be out of your control. The Inexplicable Logic of my Life I found was a decent read. It had a wide range of diverse characters that allowed for an entertaining read. Though I had some minor complications with following along with the story. I did however find myself crying every here and there.

I think the thing I most enjoyed were the characters. My most favourite character was Mima. She was what everyone wishes their grandma to be like. She was loving and caring and she had the best stories to tell as well as the greatest food to make. To me my next favourite character would've had to have been his dad. His dad was full of love and life and good knowledge. I really enjoyed how he was never quick to judge and he had a logical explanation that included facts. Let's also raise the fact that he was a single gay parent raising his adoptive son in the world still full of judgment. I also really enjoyed his best friend Sam. She was charismatic as well and quite a know it all. She felt that what she was saying was the truth and nothing but the truth. However I also love that she noticed her wrongs and her faults in life. She seemed to be a very knowledgable character and well read. I really didn't joy reading her character because I found her to be quite interesting. These are my most enjoyed characters.

I did enjoy parts about the main character. I would have to give it to Sal he wasn't a bad guy however I found that sometimes I got quite frustrated. No it wasn't for the fact that he was not interesting because I do believe he was quite interesting, and he had a lot to learn from. However the part that lost me was that he sounded so much younger than he was actually was supposed to be. This book takes place at the beginning of senior year for high school where I found that he could've much likely been in a middle school. Now that wasn't his fault it was just that the style chosen by the author was inaccurate. So that was my issue, it was the voicing of the characters not the characters themselves. I found that the author could've done a better job for each characters voice.

Next issue I had was with the consistency of the story. The back of the book kind of made it to be a book set in a high school senior year. Trust me it was set in a high school however it didn't focus on it. I found the plot to be kind of all over the place. It was in high school going through days and then randomly we'd have a memory pop up. Yes it did have to do with the character in the end because this book was clearly about him finding himself, but for some they may not necessarily pick that up as fast, so it was sort of confusing. As well, sometimes I found the story to be a little doll and I would lose interest but then it would pick up again. I found myself enjoying the moments with Mima and the rest of sal's family as well as the scenes were his dad was involved. Overall though the plot of the story was confusing as well as inconsistent, I did find this to be a rather enjoyable story to write.

Another thing I have to point out is the food mention in this book. A lot of the time I found myself craving the different types of Mexican food that was talked about. Everything mentioned sounded so good and very well detailed. It was obvious that the author knew how to work my senses quite well when I came to the description of certain items so I did very much enjoy the aspect of his description skills.

In conclusion The Inexplicable Logic of my Life was generally a good book. It showcased struggles that many of us have to face on a every day basis as well as the still racist and sexist side of the world. I loved the diverse cast the author illustrated as well as the amazing morals to go along with it. Though I had minor issues with the plot line as well some of the voices for the characters I would say overall this was a good read. I would rate this book 3.5 out of five and when you read it I hope you do enjoy the read. 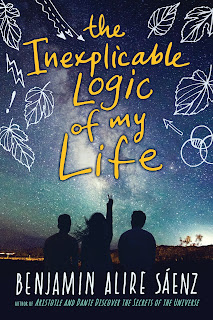 Everything is about to change. Until this moment, Sal has always been certain of his place with his adoptive gay father and their loving Mexican-American family. But now his own history unexpectedly haunts him, and life-altering events force him and his best friend, Samantha, to confront issues of faith, loss, and grief.

Suddenly Sal is throwing punches, questioning everything, and discovering that he no longer knows who he really is—but if Sal’s not who he thought he was, who is he?"
Posted by Sabrina at 7:00 AM
Email ThisBlogThis!Share to TwitterShare to FacebookShare to Pinterest
Labels: ARC Review