Author of the Month~ August 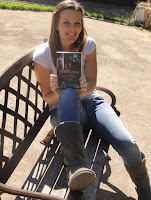 Rachel E. Carter is a young adult author who hoards coffee and books. She has a weakness for villain and bad boy love interests. When not writing, she is usually reading, and when not reading she is usually asleep. To her, the real world is Hogwarts and everything else is a lie.

The Black Mage is Rachel’s first YA fantasy series, with many more to come. She loves to interact with fellow readers & aspiring writers, and here is a list of places you can find her online

Connect with Rachel through:

Posted by Sabrina at 8:02 AM
Email ThisBlogThis!Share to TwitterShare to FacebookShare to Pinterest