Hey all! I am such a terrible fan who loved this series so much, that I only ever reviewed the first book.... I think Legendary is part of the reason because it just stole my heart away. So much so that I never came down from a book high. It's fine though, because I am doing an overall series review now! 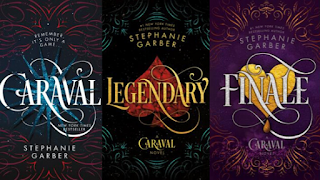 Description: Scarlett has never left the tiny island where she and her beloved sister, Tella, live with their powerful, and cruel, father. Now Scarlett’s father has arranged a marriage for her, and Scarlett thinks her dreams of seeing Caraval, the far-away, once-a-year performance where the audience participates in the show, are over. But this year, Scarlett’s long-dreamt of invitation finally arrives. With the help of a mysterious sailor, Tella whisks Scarlett away to the show. Only, as soon as they arrive, Tella is kidnapped by Caraval’s mastermind organizer, Legend. It turns out that this season’s Caraval revolves around Tella, and whoever finds her first is the winner.
Scarlett has been told that everything that happens during Caraval is only an elaborate performance. But she nevertheless becomes enmeshed in a game of love, heartbreak, and magic with the other players in the game. And whether Caraval is real or not, she must find Tella before the five nights of the game are over, a dangerous domino effect of consequences is set off, and her sister disappears forever.
Welcome, welcome to Caraval . . . beware of getting swept too far away.

I don't think there are enough words in the english dictoinary to desribe what the Caraval series meant to me. Stephanie Garber crafts a world full of magic that readers never know what is real and what is an illusion. That idea itself is one of the highlights of the series for me as a reader. I fell in love with Caraval and the idea of not knowing if things are real, becuase it allowed readers to transport into Scarlett's mind. As the series contiuned, I began to understand the world and magic more, and it amazed me more than I could have ever imagined.


The characters not only showed indivual development in each book, but showed a huge character ark by the time the story wrapped up. I felt that each character also stayed consistent and true to themselves with all their decision making. I applaud Stephanie Garber for that, as it is something I do not see often enough in the books I pick up. If I had to choose a favourite character, I don't know if I ever really could. Finale is told in the sisters alternating perspectives, and there was never a time where I found one half of the perspective lagging. Which is another thing I often find with alternating perspectives. Overall each main and secondary character stole my heart away and will never be forgotten.

As for the story itself, it also progressed in ways I could never even fathom on my own. Each book wrapped up it's own concerns, but still contributed to the overarching mysteries. I felt satisfied at the ending of each book, but still had a need to continue because that is just what this story does to you. The overall plot-line is easy to follow and very comprehendible. By the time you hit the ending of the final book, you feel complete with the story itself.

All in all I highly recommend checking this series out, the magic, mayhem, and madness will surely sweep you off your feet. The storyline and characters are really well-done and thought out. Plus the readability of these books are so good.

Have you read this awesome series? If so which is your favourite?

Posted by Sabrina at 9:30 AM
Email ThisBlogThis!Share to TwitterShare to FacebookShare to Pinterest
Labels: Reviews