When I first started my blog, me and my blogger friend Alexis from Mad For Books, Luv decided we wanted to make themed tags that correlated with certain holidays or events. We called it "LL & A's monthly book tag". Some of you may remember this, some of you may not. We unfortunately slowly ran out of ideas and that resulted in us stopping the tag.

However, we had a lot of fun making the photos and coming up with the questions. So, with both of us constantly reading we decided that it would be fun to create tags that revolved around books.

So each month Alexis and I will come up with a tag revolving around either a book or a book series. The questions are non-spoiler, and everyone can participate. Along with each tag, there will a photo for you to share around as well. This month we chose the Air Awakens series by Elise Kova. 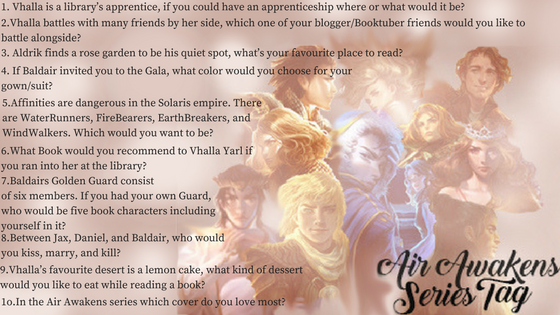 1. Vhalla is a library's apprentice if you could have an apprenticeship where or what would be?

Having an apprenticeship would be cool, but the actual idea of where is the tricky part. Could an apprentice and an intern be the same thing? I think I am going to treat it as the same in this situation and say that I would love to have a physical internship at a publishing house.

2. Vhalla battles with many friends by her side, which one of your blogger/booktuber friends would you like to battle alongside?

If I needed to go into a battle choosing some friends to help fight would be hard. Out of all my blogger and bookish friends, I feel like either Stephanie from Ohana Reads or Booknut from 21st Century Once Upon A Times. Alexis from Mad For Books, Luv would also be a worthy friend who would totally have my back.

3.  Aldrik finds a rose garden to be his quiet spot, what's your favourite place to read?

My favourite place to read is nowhere special, but in my bed covered in pillows and blankets. Its just super comfy and cozy. Plus its always super quiet so it helps me focus.

4. If Baldair invited you to the Gala, what colour would you choose for your grown/suit?

I think a royal blue would be nice, something that is not too poof.

5. Affinities are dangerous in the Solaris empire. There are WaterRunners, FireBearers, EarthBreakers, and WindWalkers. Which would you want to be?

The author Elise Kova actual made a quiz that helps you sort out your Affinity. You can find that out here http://elisekova.com/quiz-find-out-your-affinity/

However, I would choose to be a FireBearer because I am always so cold. Plus with fire some posses the ability to see into the future, so that would be pretty cool. I have also taken the quiz before and ended up with FireBearer. SO, in the end, I think it was just meant to be.

6. What book would you recommend to Vhalla Yarl if you ran into her at the library?

If I ran into Vhalla, I would definitely recommend The Cruel Prince by Holly Black because that book has a strong female protagonist. I feel like Vhalla would go for those kinds of books.

7. Baldairs Golden Gaurd consists of six members. If you had your own guard, who would be five book characters including yourself in it?

Choosing five characters to be apart of my guard is a tough one. There are so many characters who I would love to be in a guard with. I would love Jude from The Cruel Prince by Holly Black, Feyre from the ACOTAR by Sarah J Maas, Rowan from the Throne of Glass series by Sarah J Maas. Julian from Caraval by Stephanie Garber, and lastly Alyssa from the Splintered series by A.G. Howard.

8. Between Jax, Daniel, and Baldair, who would you kiss, marry, and kill (If you don't know who those characters are, pick three characters from the same book and do the same verbs.)?

This is a very tough question becuase I love all of them, but I think I would marry Baldair, kiss Jax....and....kill......Daniel...

That was hard and broke my heart a little bit.

9. Vhalla's favourite dessert is a lemon cake, what kind of dessert would you like to eat while reading a book?

10. In the Air Awakens series, which cover is your favourite?

My favourite cover would have to be Crystal Crowned for everything that it represents. Vhalla also looks super bad ass on the cover. The colours chosen as well were really pretty.

If you participate be sure to tag me or Alexis on social media. We will reshare all the posts done for it and attach it to our posts!

Posted by Sabrina at 2:08 PM
Email ThisBlogThis!Share to TwitterShare to FacebookShare to Pinterest
Labels: Book Tag

This is honestly awesome!!!! Can I do it on my blog ( booksandlovealways.com )? I'm SUCH a fan of the Air Awakens series :D