Hello everyone, today is day two of my Reader's Response week. Today's genre is YA Historical, and the book that I have chosen to take a better look at is Ivory and Bone by Julie Eshbaugh. 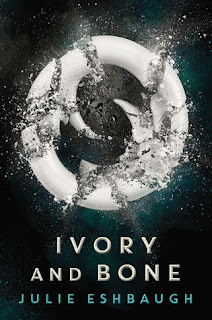 Title: Ivory and Bone
Author: Julie Eshbaugh
Publication Date: June 7th, 2016
Publisher: HarperTeen
Description: A prehistoric fantasy—with allusions to Pride and Prejudice.
Hunting, gathering, and keeping his family safe—that’s the life seventeen-year-old Kol knows. Then bold, enigmatic Mya arrives from the south with her family, and Kol is captivated. He wants her to like and trust him, but any hopes of impressing her are ruined when he makes a careless—and nearly grave—mistake. However, there’s something more to Mya’s cool disdain…a history wrought with loss that comes to light when another clan arrives. With them is Lo, an enemy from Mya’s past who Mya swears has ulterior motives.
As Kol gets to know Lo, tensions between Mya and Lo escalate until violence erupts. Faced with shattering losses, Kol is forced to question every person he’s trusted. One thing is for sure: this was a war that Mya or Lo—Kol doesn’t know which—had been planning all along

Sabrina: Ivory and Bone is told in a Second person perspective with reader getting the POV the main POV as Kol and having you reference us as Mya. Did you ever consider having it as a duel POV between Mya and Kol instead? Or do you feel like that would’ve changed the story?
Julie: This is a great question. The choice of using second person is probably the most talked about aspect of Ivory and Bone, but to be honest with you, it is something I feel is an intricate part of the story and anything else would have resulted in a very different book. I actually did consider a dual narration, but to be honest, it didn’t work well because Mya is so mysterious and guarded, and I wanted to maintain that about her character.
The second person actually came about on its own. The first scene I wrote (that made the cut and stayed in the book,) was the prologue scene, where Mya asks Kol to tell her a story. That just prompted the choice to use the second person. To be honest, after drafting about three chapters, I tried to change it to a straight first person, but I felt it lost an intimacy—Kol’s voice became more removed and objective. I think his feelings for Mya really come through because this is the story as he chooses to present it to her.

Sabrina: In chapter 30 and from that point on you change POV’s, and Mya becomes another character we are reading. Was it to bring readers back to present day, or was it to help the readers understand something greater between Kol and Mya?
Julie: Well, the plot drove that choice to an extent, because the story catches up to the prologue and yet there’s more to tell, so it moves forward in their present time, even though Kol has finished telling the story-within-the-story. Interestingly, my agent expressed his wish that the book could stay in second person all the way through. I felt the same way, but ultimately I decided (and my agent agreed) that the shift helps the story. It gives the reader the chance to see Mya a bit more objectively through the final scenes.

Sabrina: Though this book is considered fantasy, had you done any research pertaining to some of the ideas held in this book? Such as the way the clans are set up, hunting traditions, and foods.
Julie: I researched quite a bit! I actually read four nonfiction books about the first people to come to North America from Asia. I imagine the clans in the books as being part of that migratory wave. The book I relied upon the most is called First Peoples in a New World: Colonizing Ice Age America, by David J. Meltzer. I also did specific research on the plants that grow in the Northwest and are used by indigenous peoples there for food, medicine, and textiles. The research was extensive, but I’m so fascinated by that time period, I loved it.

Sabrina: Beside having the meadow be a quiet space for Kol, was there any hidden meaning behind it, or symbolism for you while writing the scenes that took place there?
Julie: Definitely the meadow was intended to reveal Kol’s character—we learn that he loves his clan but also needs solitude frequently. But it also ties into the aspect of his role as a gatherer of honey for his clan. He heads to the meadow in search of bees. The gathering and sharing of honey was absolutely intended as a symbol in the book. It was meant to represent the sweetness of life, even in such a challenging world. His desire to share the honey he’s gathered with Mya was meant to be a symbol of his desire to share the sweetness of life with her.

Sabrina: Readers get the opportunity of seeing the multiply shifts in the seasons throughout the book, did you plan this to go along with the way the characters were growing and changing? Or did it reflect more in the way the story and plot was going?
Julie: The weather does shift quite a bit throughout, since the story starts at the beginning of their summer, though it’s still quite cold, especially at night. The biggest change comes at the end, during the climax, when they are hit by a late snowstorm. The choice to bring winter back in that scene was meant as a symbol of what was happening in the plot, with the struggle to break away from the negative things in their past that have returned. There’s an exchange of dialogue right before the climactic scenes where Mya comments that she met Kol on a summer day, but now winter has returned, and she wonders if winter will triumph. She’s speaking both literally and figuratively here—she wonders if the past will overcome them. But Kol promises her that winter will be defeated and summer will return. That’s a fairly safe promise when it comes to the literal sense of the weather, but a more complex one in the figurative sense, though he means it both ways.

Sabrina: Book 2 Obsidian & Stars releases soon (or well by the time everyone will be reading this it will be out). Did you decide to incorporate the different POV in that book as well? Or is it mainly Mya’s POV?
Julie: I originally intended Obsidian and Stars to be the mirror image of Ivory and Bone, with Mya telling a story to Kol. I wrote quite a few chapters that way, but my agent gave me feedback that it felt forced. I had to agree with him. It wasn’t working and I ultimately changed it to a traditional first person from Mya’s point of view. I think a big part of the problem was that it didn’t fit Mya’s character. She’s a private, guarded person, and it didn’t work for her to be as open as the second person demanded. In the end, first person worked much better for Mya’s book. It really taught me how much form and structure needs to serve the story.

Sabrina: Thank you again Julie for sharing some insights on Ivory and Bone. I look forward to reading more of your writing in the future.


Julie: Thank you for inviting me and asking such great questions! It’s been a real pleasure to be your guest.

~Mini Review~
Ivory and Bone is being put on my favourite reads of 2016, it was a masterpiece that was crafted by a very talented author. It's crazy to think that this is Julie Eshbaugh's debut novel. By reading this book I would've assumed that she had published many books beforehand. Everything about this book spoke to me as a reader, from the carefully crafted characters, to the well thought out storyline. Ivory and Bone was brilliant and fully deserves a 5 out of 5 star rating.I have read many novels, but I don't believe I have ever read many books told in the point of view of second person. I think parts of me may have strayed away from that kind of POV because I felt as though it becomes harder to connect with the story itself and characters right away. However all my doubts were tossed out the window after I finished this book. I was astonished at how well this POV helped me get involved in the story, how the POV transported me as reader into the book. I loved the lead in chapter that helped get you situated and then the last chapter that led you out of the story. Everything about the POV was orchestrated so well.
Posted by Sabrina at 7:00 AM
Email ThisBlogThis!Share to TwitterShare to FacebookShare to Pinterest
Labels: Reader Response