Author of the Month~ March 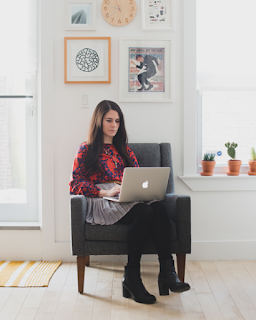 E.J. Mellow is the Award Winning author behind the NA Contemporary Fantasy trilogy The Dreamland Series. With a bachelor's degree in Fine Arts, E.J. Mellow splits her time between her two loves – visual design and writing. Residing in NYC, E.J. is a member of Romance Writers of America and their Fantasy, Futuristic & Paranormal Chapter. She has no animals but loves those who do.
Connect with her on:

~Interview Time~
Sabrina: Hello E. J. Mellow! It is such a privilege to say that you are my Febuary Author of the Month.. It’s also such an honour to have you on my blog as well.
EJ: Hi Sabrina! It’s such a pleasure to be here.
Sabrina: Who are some authors you have begun to admire over time?
EJ: Oh man, this list could be endless and fit with different categories of authors, from those I’ve met and gotten to know to those whose work I’ve followed over the years and consistently been blown away with.  I think if I could mix the two I would say Marie Lu, Merissa Mayer, V.E. Schwab, R.S. Grey, Devri Walls, Elise Kova, J.Kowallis, Lisa Kleypass and Sarah J. Maas.
Sabrina: Where did the inspiration for your dreamer series come from?
EJ: The idea idea for The Dreamer actually started as a dream. I’ve always had very vivid ones. I even keep a dream diary, though my notes come out mostly illegible from my brain still being half asleep when I jot them down. But yes, I had a dream that lasted a whole week. With the same characters and the same plot continuing on each night. It was crazy! It felt like I was going to sleep and clicking on a TV show. There also just so happened to be this guy…who might have been very good looking…Okay, okay he was extremely good looking. ;)

Anyway, a couple days into the dreams, I found myself waking up and feeling sad that I wasn’t still there (if you’ve read The Dreamer, you can probably see a connection here). The dreams eventually stopped, but the idea of them stayed with me for a while, and I ended up telling a friend. During that conversation is where the genesis for my series came about. Also, the more I researched about sleeping and dreams, the more I became semi-obsessed with the idea that this other side of ourselves, which spends almost half of our lives asleep, has to be living some form of life as well—we’re conscious of it or not.

Sabrina: In three words, how would you describe your next book?
EJ: Romantic, Action-packed and Sarcastic.
Sabrina: What was your favourite part about the The Dreamland series?
EJ: The experience of writing a trilogy was extremely educational. It’s tough planning out smaller arc stories in each book as well as one large one that bridged all three, but I’m very proud of what I created with the characters and world.
I also think all the people I’ve met, from bloggers to authors, during the process of creating The Dreamland Series has been invaluable. I’m so thankful I’ve been able to procure such friendships and can’t wait for what comes of writing all my future stories.
Sabrina: Who has been your favourite character to write and share?
EJ: Oof, another tough one! Maybe because she’s so recent in my creation, but I’ve really enjoyed writing Nashville a.k.a Kill-Op 3 who’s the heroine for my newest book releasing in March. She’s a hard ass for sure, but writing from the perspective of someone so confident and actually has the talent to back up such boasting was really enjoyable. It was also fun writing a character that was so strong, literally.
Sabrina: How did you come up with the names for your characters?
EJ: Names for all my characters in both The Dreamland Series and The Animal Under the Fur are super important to me. I made sure each of them had meanings that reflected the character they are or had a very specific reason to be chosen, as in Nashville’s case with her being found abandoned on the streets in Nashville Tennessee.
Sabrina: What are two quotes from The Dreamland series that you are proud to say you wrote and crafted?
EJ: Tough one! Hmm, I feel like I’d have to read my series again to answer this correctly. Ha. But for timing purposes, I’ll quote two that I used in promotional posters that I really loved.
“I search for you in the stars tonight, but I found none that burned as bright as you.”
“We can’t change the past, we can only try and guide the future.”
Sabrina: Do you require anything in order to sit down and have a good writing or editing session?
EJ: 100% a cup of tea and a good scented candle.
Sabrina: When you are not writing, what do you enjoy doing in your free time?
EJ: I love reading. It’s almost impossible for me to read other books while I’m writing so as soon as I hand off my manuscript to my editor or hit publish I binge as many books as I can before starting to work again. I also love movies and hanging with my friends and family.
Sabrina: What one piece of advice you would give to a debut author?
EJ: Never stop writing, even if your first book flops or doesn’t do as well as you’d hope with procuring an agent or self-publishing. Most debut author’s first books are not the ones they end up sharing with the world, mine certainly wasn’t. It’s locked away in a drawer to never see the light of day, but it was an important exercise for me to go through in order to learn my voice and what were my weaknesses and strengths as a storyteller. There’s a Neil Gaiman quote that I read early on that inspired this truth for me. He said, “Whatever it takes to finish things, finish. You will learn more from a glorious failure than you ever will from something you never finished”.
Sabrina: Thank you so much for taking the time to sit down with me today. It has been a pleasure interviewing you and I can’t wait to read all your future creations.


EJ: Thank you so much for having me Sabrina! This was so much fun J.
Posted by Sabrina at 5:30 AM
Email ThisBlogThis!Share to TwitterShare to FacebookShare to Pinterest
Labels: Author of the Month

I think I have one of the books and I need to read it now!
@TeacherofYA