Inherited by Freedom Mathews happens to be one of my very first pirate YA books. I mean, don't get me wrong, I many on my to be read pile, but there was something about Inherited that made me want to read and experience it right away. Since I have given this book five stars, I will share five of my favourite quotes... 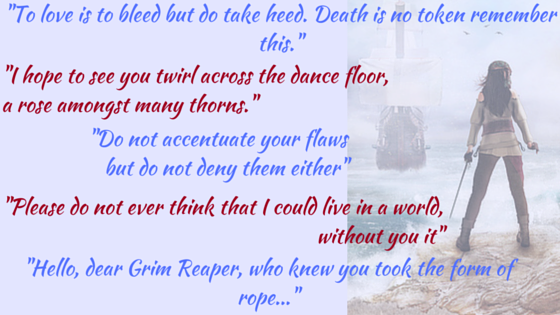 **Disclaimer: I received an ARC copy from the publisher in order to give my honest review of this book. This does not effect nor influence my opinions about the book in any which way**

I was wary when starting Inherited, I had read the synopsis and found it to be absolutely enticing. However I didn't quite know how I would take to the whole Pirates and faeries idea combined. I believe Inherited from the very begining pulled readers in and made them want to conintue. I know that for a fact, it had this effect on me. The story was well versed, and the characters were clearly illustrated throughout. Inherited by Freedom Matthews clearly deserves a 5 star rating.

The thing that hugely impacted my reading experience was the story line. It was like nothing I had read before. This book in a way I believe had two main focal points or possible story ideas and I believe Freedom did a brilliant job at combining both. She orchestrated scenes that could potentially clash, however with planning nothing did. We follow a crew of pirates who are aboard the Wilted Rose. They are cursed looking for the rest of their crew to free them of this very curse. Right away we are pulled into the action and the finding of a crew member. From that point on the action and adventure continues to rise. I liked that the curse had to do with love. To love someone in this book basically put you in a torturous situation, and countless times it was shown that loving wasn't something to be taken lightly. I liked that no one was safe as well. In this book we witness the death of some characters, and as much as I loved them, I understood why thinks had to happen. These characters were also quite crucial to the story itself. No one was safe basically.

Another thing I had to hugely applaud Freedom for were the villains in this story. Not only was love itself was practically a villain, but there was a physical character to play the role of the villain as well. She was created in a way that you could potentially feel sorry for her, but in a way still want to kill her yourself. Another aspect about this villain and her motivates that I really enjoyed was the way we could identify if she was near the Wilted Rose. It was unique and a very cool premise.

I also really enjoyed the setting of this book. We  aspects of Europe through the eyes of the crew members. However my favorite setting was when they were on the enchanted ship itself. It was enticing to entertain the idea that this ship steered itself. The idea that the ship would take them to where the adventure was needed or where the characters had to complete an important task. I liked the looming forces of the sorceress and Rosa. Both of those characters helped move the story along in a way that allowed the reader to get a full understanding of what was going on.

I loved these characters. I think I raved about them to anyone who would listen. Since they were on the ship as crew members each bounced off one another in a way that complemented each. Every character had some special talent that them aside from the rest of the crew. In general the characters were well written and clearly portrayed with each having their own voice and characteristics. However with that being said, there were a few characters that stood out to me the most.
Lennie, or well Valencia was by far one of my most favourite characters from this book. She stood out to me at first because she was in fact the only girl on the Wilted Rose for a little bit. She was an equal to every guy on the ship and that's what made her even better. I also liked that she could joke around with them in a way that made her fit in perfectly. I also liked that Freedom entertained the idea that Lennie was a broken character as well. That within that smiling and playful exterior, there was a very broken interior. She had a past, a past that wouldn't just simply leave her alone.
Another one of my favourite characters was Butch. From the start he was the person who had held Lennie together. He was a constant friend to her and he cared about her deeply. I really enjoyed learning about him as well as seeing his character develop. This boy had to scarifice a lot due to emotions and I praise him for it. I loved that he was always there when Lennie needed that extra kick or pick me up. Seeing their playful banters made the book so much more interesting.
The Final character I will mention is Nathaniel. Can I just say that I think we all need a Nathaniel in our life? He writes, he's caring, and he's super creative.  Seeing him from the point when he's in water being allowed aboard the Wilted Rose to his last few fight scenes in the final pages of the book; I as a reader could see the tremendous development that bestowed dear Nathaniel. I believe his transition was a little bumpy I believe he did develop into the character he was meant to be.

In conclusion, if you are someone who gets enticed by sea life in books, I believe this book is a read for you. Also If you a book with intermingling plot lines and characters who are sure to rock your boat (no pun intended there) Then Inherited is the read for you. It has Adventure, love, and death. I highly recommend this read, and I look forward to reading future products by Freedom Matthews. 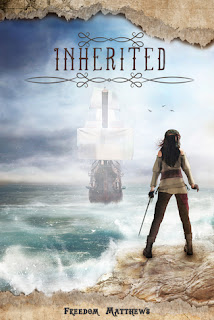 Purchase:
*Amazon Uk *Amazon
Posted by Sabrina at 10:27 AM
Email ThisBlogThis!Share to TwitterShare to FacebookShare to Pinterest
Labels: Reviews

Oh my God, yes! I'm so glad you loved it! I told you the pain would be worth it! Ah, also, I loved your review, and I completely agree with you; Freedom did an amazing job! ♥