"Welcome to the Candidacy. Where dreams go to die." 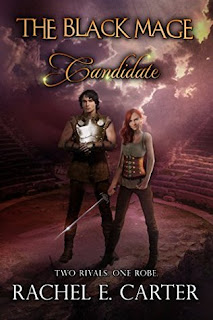 Title: Candidate {The Black Mage #3}
Author: Rachel E. Carter
Publication date: October 26th, 2015
Description: "Twenty-year-old Ryiah is a black mage of Combat, but she is not the Black Mage. Yet. She’s had her eyes on the legendary robe for as long as she can remember, and in just one year she will have a chance at her country’s prestigious – and only – tourney for mages... Too bad she is going up against a certain non-heir. The one person she has yet to beat.

Meanwhile Ry has a year to prove herself in her new role as a war mage and the prince’s betrothed. Neither is quite what she expected and complications arise on both fronts. War is on the horizon, and with so many enemies the kingdom of Jerar’s fate is more than ever at risk.

The Candidacy finally arrives, but it’s only the beginning. Nothing can prepare her for what comes next."

**Disclaimer: I received a finished copy from the author in exchange for an honest review. This does not effect my opinions in any way. Everything stated in my review is of my honest opinions and interpretations.**


Rachel E. Carter has created yet again another amazing book in this Black Mage series. She truly knows how to make a story come alive and off the pages. I think this book had my favourite story line so far in this series. I would give this book a 5 out of 5 stars.

Story:
I loved the story in this book. It kept me on the edge of my seat throughout the entire length of this book. I loved the way Apprentice ended, and how Candidate transitioned where that book left off. I  absolutely loved the transitions between the two books. Candidate also had a nice pace to it. No scenes felt rushed or to slow. Most were also the prefect length as well. I enjoyed the curve balls that Rachel threw at us readers as well. Some curves were a little more heartbreaking, but nonetheless they were still amazing.

Now for the actual Candidacy, those were cringing chapters to read. It was gruesome, however that's what it's all about. The battles we read about were so mystical and well planned. I liked reading about the different magic being used as well. Some events that unfolded during the Candidacy were utterly heartbreaking, but not enough to crush me completely.

The ending of this book is what broke me. The next book doesn't come out until later this year and I am not too sure if i'll be able to survive that long. It's not that the book ended on a cliff hanger, but just the way it ended left me lost. I will also say that after finishing this book I got into the hugest reading slump because I was so caught up with all of this and this magical world.

Characters:
Carter's characters are what set aside her books from others. Each one brings a whole different aspect to the story itself. Another thing I really liked about the characters were the changing sides to them. You never truly knew a character until they revealed their true selves. I know that in this book we see a lot of different sides to the characters within these pages. I read about things I never thought to be possible. I also mourned characters I thought I would never have to mourn.

Darren was amazing as always. Some things that unfolded in this book made me a little peeved at him at times, but he always found a way to redeem himself. I am also really proud of him as well, due to certain events that I will not say because I don't want to spoil. I feel bad for his character the most by the time this story finishes. I am extremely worried to see what he as a character will have to endure...hopefully it doesn't kill me in the process.

Ryiah, oh dear Ryiah. The amount of stuff that unfolds before this girls it's rather amazing she hasn't decided to jump ship and go live out on her own. But then again, that wouldn't be Ry at all. She has to withstand through so many changes around her. I know that she is a tremendously brave character. Also I feel bad for the events she must live through due to the choices other characters have made. I am curious to see where she goes with the choices she has determined at the end of this book. I hope she can survive and strive. I also hope that she doesn't regret the choices she made.

In summary Candidate has shocked the whole heck out of me. I loved it completely and whole heartily, but it has also destroyed me as well. Rachel E. Carter is now announced to be one of my top favourites authors on the ever changing list. She is very high up there now. I can't wait to read the last and final book in this series. If you pick up The Black Mage series, I hope you enjoy it as much as I had.
Posted by Sabrina at 2:27 PM
Email ThisBlogThis!Share to TwitterShare to FacebookShare to Pinterest
Labels: Reviews