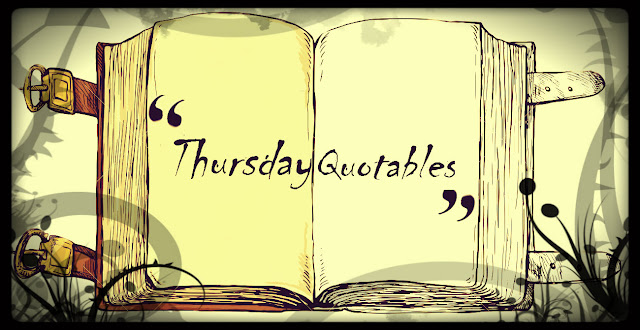 Thursday Quotables is a weekly meme hosted by Bookshelf Fantasies
It's all about sharing a quote, passage, or line from a book that your have read recently or are reading currently. The quote can be anything because it's obviously worthy, if you feel like it's worth mentioning.

This week's quote(s) is coming from: Six of Crows by Leigh Bardugo

Six of Crows is the first novel to start off Leigh Bardugo's next series. It takes place in the same world as her Grisha trilogy. This is actually the first book I have picked up that was written by Leigh. However with the way this novel is effecting me, it most certainly won't be the last.
One of my favorite things about this book are the witty comments between the six main characters. I have chosen three little teasers to share with you. I hope you enjoy!

" Just trust me, Nina."
"I wouldn't trust you to tie my shoes without stealing the laces, Kaz."


This is around the first time in the book that you are exposed to Nina as a character. She was obviously a great addition to the characters. I was equally as happy to discover she also had some quirky comments to make.

"You were early Jesper," Kaz said as he nudged Matthias toward the boat.
"I was on time."
"For you, that's early. Next time you plan to impress me give me some warning."
"The animals are out, I found you a boat. This is when a thank-you would be in order."

This is just one of the prime examples of the witty bickering that takes place between Kaz & Jesper. I think I also really liked this quote because it's around this point in the novel where I realized that Kaz is never going to go out of his way to tell his colleges that they had done something right. Also how funny Jesper is.

I would have to say that hands down, this, was my favourite quote. I enjoyed reading all of the characters answers. It was a curious question to get the responses too. I also really enjoyed this scene because I got to see all the ways the different characters think and what goes through their minds since all the answers were honest.

About Six of Crows 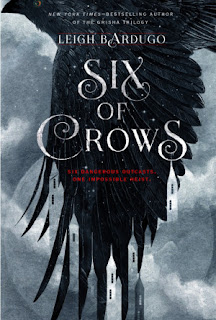 Ketterdam: a bustling hub of international trade where anything can be had for the right price—and no one knows that better than criminal prodigy Kaz Brekker. Kaz is offered a chance at a deadly heist that could make him rich beyond his wildest dreams. But he can't pull it off alone..
A convict with a thirst for revenge.
A sharpshooter who can't walk away from a wager.
A runaway with a privileged past.
A spy known as the Wraith.
A Heartrender using her magic to survive the slums.
A thief with a gift for unlikely escapes.
Six dangerous outcasts. One impossible heist. Kaz's crew is the only thing that might stand between the world and destruction—if they don't kill each other first

Have you read Six of Crows? If so, what were you favourite parts? If not, Do you want to read it?
Posted by Sabrina at 12:44 AM
Email ThisBlogThis!Share to TwitterShare to FacebookShare to Pinterest
Labels: meme, Thursday Quotables

I keep seeing raves for this book! Sounds like it's got some great writing. Glad to see you're enjoying it!

I'm seeing this book everywhere, it's the latest craze! Those quotes are quite funny too :) I'm glad your enjoying it :)