Review ~ To Kill a Kingdom

― Alexandra Christo, To Kill A Kingdom 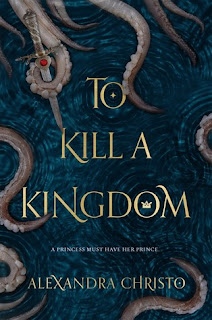 Title: To Kill A Kingdom
Author: Alexandra Christo
Publication Date: 2018
Publisher: Feiwel and Friends
Pages: 342
Format: Hardcopy
Description: Princess Lira is siren royalty and the most lethal of them all. With the heart of seventeen princes in her collection, she is revered across the sea. Until a twist of fate forces her to kill one of her own. To punish her daughter, the Sea Queen transforms Lira into the one thing they loathe most- a human. Robbed of her song, Lira has until the winter solstice to deliver Prince Elian's heart to the Sea Queen or remain human forever.

The ocean is the only place Elian calls home, even though he is heir to the most powerful kingdom in the world. Hunting sirens is more than an unsavory hobby- it's his calling. When he rescues a drowning woman in the ocean, she's more than what she appears. She promises to help him find the key to destroying all of sirenkind for goof- But can he trust her? And just how many deals will Elian have to barter to eliminate mankind's greatest enemy?

Hello readers! This is my first review as a blogger and I'm so happy I have an amazing book to do it with!

So I just want to start by saying that this book completely BLEW ME AWAY. I was in love from the first page and on the edge of my seat every page after. I actually had to stand up as the book concluded because it was too much for me to read sitting down. Every chapter is spun so carefully and knitted together with clues I had no idea were clues until the very end. This was a book where every detail is important, where dialogue is more than just a response or an expression but a riddle in which you had to recognize it as something more before deciphering what it could truly mean.
The book is written in first person point of view of the two main characters, one being the Princess of the sea and the other being the Prince of the land. I have never been a fan of multiple first person POVs, but Alexandra did a fantastic job. One of the issues I have with first person is that often, too much information is explained about how more than one character feels, what they plan and their actions, but in To Kill A Kingdom, I found it was actually quite opposite. In this book, I actually forgot a few times that it was written in first person since both characters were secretive and only hinted at things they were feeling or thinking, never delving into too much detail, which aids the suspense in the story.
I also found the use of multiple languages to be very effective. I find it very difficult to introduce and explain new languages to readers since translation format can get confusing and it’s also just plain hard to make up a new language. But in To Kill A Kingdom, I found that it wasn’t obsessed about. There were many languages in the world set inside the book, but the author only focused on two of them, one being psáriin- the razor-sharp language of the Siren, and Midasan- the delicate language of the Midas kingdom. Translations were not used very often, instead, we figured out what the Sirens were saying by context, and an explanation from one character to another.
Another problem I often find in books with more than one language is that characters just magically seem to know every language and every word spoken, or that they just happen to learn a language very quickly as they spend time with characters. However, in To Kill A Kingdom, Lira- our Siren princess- learned the basics of language all over the fictitious world to better hunt her human prey. However, when she is forced to speak Midasan- the language of Elian, our prince- we see that she is obviously not fluent and is occasionally left behind in conversation because of a lack of vocabulary.
One of my favourite parts of reading this book, was the constant banter between the Prince’s crewmates, the prince and princess. Elian and Lira’s conversations were clever and always held double meaning while usually hilarious and insulting. The strange relationship between Elian and Lira starts off being as a form of hate, insulting each other at every chance they get. But as their relationship grows, readers can see their insults become more meant to tease and less to hurt.
Something that really frustrates me in dialogue are clichés. If you feel the same way, then I would definitely recommend this book. The dialogue alone made this book one of my favourites, with carefully planned conversations that seem to flow with the natural characteristics of the characters in this book.
Moving onto the base of the book, we have two types of creatures. Our humans and our Sirens. I love the idea of Sirens, but I have found by reading other books with Sirens that it can be a tricky thing to write about. And Alexendra Christo does it flawlessly. In this book, Sirens do not eat humans, (which always seemed to be kind of cliché to me) instead they steal human hearts from their chest to give them power. Every year, a siren is allowed to take a single heart on their birthday so that they get stronger with each passing year. After a Queen gathers a certain amount of hearts, or reaches a specific age, she passes the title of queen onto her next daughter. For Lira, the next in line for the Siren throne, she only takes princes’ hearts giving her the nickname among humans as ‘the princes’ bane’. When the book takes place, Lira still has another three years before taking the throne from her cruel mother- the Sea Queen.
I found this plot very refreshing in the sense that two strong-willed characters with two completely different plans for each other’s species find a way to understand the another without sacrificing what they believe in. And they do it without clichés!
The ending of this book was a story on its own. Every single time I thought it was going to end with my remaining favourite characters intact, the battle would begin again. I have a horrible habit of counting the remaining pages to try and predict what fate is possible with the amount remaining, and this book was particularly torturous for me because, with barely any pages left, the plot seemed to continuously rise. Yet the ending was still perfect for our two main characters- and guess what…. It had no clichés!
Overall, this was one of my favourite books I have read in a while. If you love strong-willed characters, never ending suspense and intricately woven plots then I would highly recommend this book.

P.S. I laughed for a couple minutes at the first acknowledgment since I thought it was hilarious so if you don’t normally read acknowledgments I would recommend reading these ones!

Posted by Serena at 9:30 AM
Email ThisBlogThis!Share to TwitterShare to FacebookShare to Pinterest
Labels: Review