Hello readers! I know it's been quite some time, but today I am excited to announce that I was apart of the Mirage Blog Tour hosted by the lovely people over at Raincoast books. Today on my stop I will be sharing with you my review and a brief excerpt. Enjoy!

Description:In a star system dominated by the brutal Vathek empire, eighteen-year-old Amani is a dreamer. She dreams of what life was like before the occupation; she dreams of writing poetry like the old-world poems she adores; she dreams of receiving a sign from Dihya that one day, she, too, will have adventure, and travel beyond her isolated moon.

But when adventure comes for Amani, it is not what she expects: she is kidnapped by the regime and taken in secret to the royal palace, where she discovers that she is nearly identical to the cruel half-Vathek Princess Maram. The princess is so hated by her conquered people that she requires a body double, someone to appear in public as Maram, ready to die in her place.

As Amani is forced into her new role, she can’t help but enjoy the palace’s beauty—and her time with the princess’ fiancé, Idris. But the glitter of the royal court belies a world of violence and fear. If Amani ever wishes to see her family again, she must play the princess to perfection...because one wrong move could lead to her death.

Disclaimer: I have received a free copy of this book from the publishing house and chose to review it. This in no way impacts my opinion of the novel.

Kirkus wrote "Though the machinations of politics and identity create a slowly burning narrative, readers will appreciate the rich world and prose built by a much-needed diverse voice." and I'd have to say that I completely agree with this statement. The world building of this book was phenomenal, and though I sometimes found myself lost among the politics, it didn't make the story any less interesting. The characters also had great character building and story lines.

This book is action pack filled with raging internal conflicts due to the way the world is ran. However, that did not lead away from the romance that was within this book. The book's romance wasn't a focal point, nor did it draw away from the main plot. However, it was there and it was done in a way that supported the story. The romance also allowed for the story to have a little lightheartedness to it.

My only complaint is that of which I mentioned in the first paragraph, due to the politics I found it to be a little slow at times. However, it did not take away from my reading experience whatsoever.

All in all, I would highly recommend this book to fantasy lovers, and everyone above. This book is lyrical and I cannot wait to read the sequel to Mirage.

Prologue
He is the only one of his family without the daan. They say this makes him ideal; no traditional markings on his face to identify him should he die. No way to trace him back to his family. He is young, not yet fifteen, too young for the daan ceremony. This is what she says to him when she comes to choose him.
That he is young and that he is skilled and that he is steady. This, she says, is all that matters.
He does not feel young. He feels hungry, the sort of hungry that gnaws at him day and night, until it is so much his companion he does not know how to live without it. He feels hard, because he knows how to take a beating, how to fall just so when a guard hits him with a baton. He feels angry, so angry, the sort of anger that does not need fuel.He is invisible in a sea of invisible faces.
The crowd is silent, but then the crowds at these events are always silent. They are solemn. Too solemn. The nobles sit on velvet cushions behind gold rope, but those who stand, who look up at the podium waiting for her to appear, they are the poor. The hungry. The weak. They are here because they must be here.
The makhzen titter among themselves like jeweled birds, gowns glittering in the sunlight, scabbards flashing as men shift in the uncomfortable summer air. It is a wonder any of them are Andalaan; they all look Vathek now. They have accepted Vathek rule. They would not dress so, not if they truly were Andalaan in their hearts.
He thinks of his younger sister as he moves through the crowd. Dead for two summers now, her stomach bloated from hunger. His father, long gone, too weak to support them, to stay.
He has one sister left, and a brother besides, and his mother. All to be taken care of after this. She’d sworn. A husband for Dunya. A cottage away from the city for them all, with access to grain and a garden, and mayhap even livestock. Away from everything they know, but a chance for a new life.
His hands sweat. He has trained for this, he is ready, but he has never taken a life.
The blood never dies, he remembers. The blood never forgets.
This is for a higher purpose — one more important than his life, more important than any life. These things must be done, he thinks. In the name of Andala. In the name of freedom.
He marvels, as she climbs the steps to the dais, that one who looks so much like his kin is capable of causing such terror. He has heard the stories, knows that these things are often twisted through the telling. But his life, the lives of his siblings and neighbors, bear witness to some truth. The occupation is cruel. Its heirs crueler still.
The sun flashes against the silver metal of his blaster. He lifts it, aims, fires.
Twice. 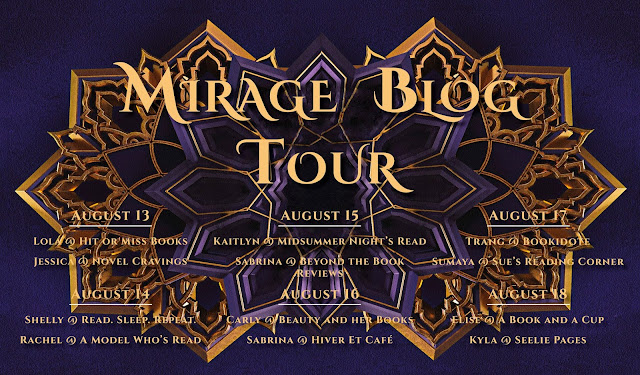 Posted by Sabrina at 10:26 AM
Email ThisBlogThis!Share to TwitterShare to FacebookShare to Pinterest
Labels: ARC Review, Blog Tour

sooo interesting Prologue. He fires... twice.... to who or what? It seems that I really want to read the book now!