ARC Review~ The Daughter of the Pirate King

This book held me captive as the story unfolded before my eyes. Each character sparked something unique in the plot as well. I will say that certain aspects of the book felt a little predictable and I saw some thing coming however it didn't affect me falling in love with this read.

I think my most favoured part of the novel was Alosa and Riden. Each character was special in their own way. Each had brilliant sarcasm and quick responses sure to leave the other speechless. I always looked forward to the interviews Riden conducted with Alosa to find out more information about the Pirate King himself. I also really enjoyed Alosa as a character. She was incredibly bad ass and knew how to hold her own. She was the captain of her own ship after all. So overall I very much enjoyed the prospects she brought to the story. Riden was also a character of his own. He was brilliant and different from all the other pirates of the ship. He showed compassion for Alosa but he was also stern and questioning of her.

Aside from my favourite aspect being the portrayal of the characters, Levenseller knew how to compose a pirate tale that would leave people for a loss at words. The story was told in a way that held it's reader captivated and enthused. Every part of the story line had me lusting for more when it all finished. I loved that all the stakes felt real and that I was on the edge of my seat for the majority of the read.

All in all I would give this book a 5 out of 5 stars for its pirate themed action packed storyline that didn't focus around romance but still contained a nice element of it. The character we executed brilliantly and the plot flowed in a way that allowed for an easy non confusing read. I highly recommend this book to those who enjoy a good Pirate read with a devilish handsome male protagonist and a strong leading female. 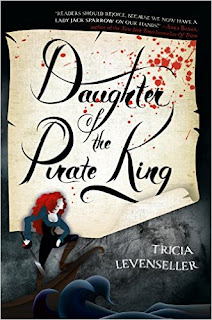 Title: Daughter of the Pirate King
Author: Tricia Levenseller
Publisher: Feiwel & Friends
Publication Date: February 28th, 2017
Format: ARC provided by McNally Robinson
Description: "There will be plenty of time for me to beat him soundly once I’ve gotten what I came for.

Sent on a mission to retrieve an ancient hidden map—the key to a legendary treasure trove—seventeen-year-old pirate captain Alosa deliberately allows herself to be captured by her enemies, giving her the perfect opportunity to search their ship.

More than a match for the ruthless pirate crew, Alosa has only one thing standing between her and the map: her captor, the unexpectedly clever and unfairly attractive first mate, Riden. But not to worry, for Alosa has a few tricks up her sleeve, and no lone pirate can stop the Daughter of the Pirate King.

Posted by Sabrina at 6:00 AM
Email ThisBlogThis!Share to TwitterShare to FacebookShare to Pinterest
Labels: ARC Review

I have read a lot of mixed reviews on this one, but I am glad you enjoyed it. I am intrigues by the pirate aspect. I love pirates and there just aren't enough books out there that feature them.