Welcome back to Alexis from I'M MAD FOR BOOKS, LUV and mine monthly book tag.

Every month we thought it would be fun to come up with a theme and to go along with that chosen theme, a tag. However it wouldn't be just your average tag, the questions would relate to books which in the end will also relate back to our theme for that month. So I guess you could call it a book tag.
To see the officially launch page click here


We welcome anyone to join. If you do participate, we ask that you notify one of us via My Twitter or Alexis's Twitter, or by commenting on either of our posts with the link to how you did this book tag. In doing so it allows us to add the link to your book tag to that months book tag post on our blogs. We also ask that you somehow link back to us as well.

This months theme is...
Magic & Sorcery <Questions>
1) What is your favourite book that includes magic or sorcery?

•My favourite would have to be Air Awakens by Elise Kova. For the longest time it was Harry Potter though.

• My favourite muggle movie.. that's definitely a tough one. I'll give a couple. The first pick would have to be Tim Burton's Alice in Wonderland, the second would have to be Thirteen going onto Thirty ( Do not laugh, I used to watch it all the time so I have to put it) and my last pic would be The first LOTR movie.

3) What is your favourite Harry Potter book?

•Harry Potter and The Deathly Hallows.

4) If you could have any Magic/sorcery power what would it be?

•This is a very tough one for me. I would want to say mind reading, but then I feel like that would be an invasion of someone else's privacy. I think telekinesis and invisibility are at a tie right now. However I would feel lucky enough to do anything.

5) What is your favourite fantasy book cover?

• My absolutely favourite fantasy cover as of right now is Fire Falling by Elise Kova. 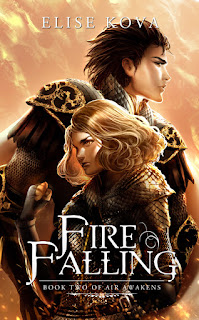 It's absolutely stunning, Isn't it?

6) What two characters (from any books) would you want to practice your spell casting with?

7) Who is your favourite author that writes Magic/sorcery books?

8) Which wizard/sorcerer would you want to meet (movie or book)?

•If I could meet any wizard or sorcerer I would want to meet Hermione Granger. She was an absolute favourite character of mine as a child.

9) What magical world, would you want to be apart of (movie or books)?

•I would want to be a Sorcerer in the Air Awakens world. I have only newly discovered it, however I have fallen madly in love with the world and characters.

10) If you could be a Waterrunner, Firebearer, Groundbreaker, or Windwalker, which would you want to be?

• If I could be any one of those I would choose an Windwalker. I feel as though that one has the highest Potential. It can snuff out fire, direct water with powerful winds. It would just be so cool.
I wish anyone to participate & enjoy!!

Linda over at La La in the Library did the tag HERE
Posted by Sabrina at 3:32 PM
Email ThisBlogThis!Share to TwitterShare to FacebookShare to Pinterest
Labels: LL & A's MBT

Hello, I just tagged you in the I Mustache You Some Questions tag. Be sure to check it out later on!